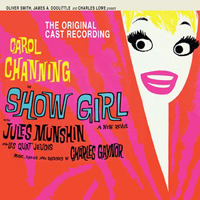 (3 / 5) Carol Channing spent many years between Gentlemen Prefer Blondes and Hello, Dolly! touring in a successful nightclub act that was gussied up for Broadway as Show Girl.  Critics and audiences were cool to having a legit stage used for what they saw as an illegit show — little did they know what was to come! — so it didn’t stay around long, but the album is charming. The music, lyrics, and sketches by Charles Gaynor draw some material from the star’s breakthrough 1948 Broadway show Lend an Ear, created by Gaynor. Channing was joined onstage in Show Girl by comedian Jules Munshin, but their sketches didn’t make it to the recording; Munshin is only heard sharing two sly songs, “My Kind of Love” with Channing and “The Girl Who Lived in Montparnasse” with Les Quat’ Jeudis, a French quartet. The rest is all Channing, and she’s wonderful, whether singing the faux Rodgers and Hammerstein number “This Is a Darn Fine Funeral” or enacting the tragic tale of silent film star Cecilia Sisson, whose career was doomed by a hilarious speech defect when the talkies arrived. Channing fans should be aware that Show Girl also exists on video, having been taped for TV way back when. — David Wolf