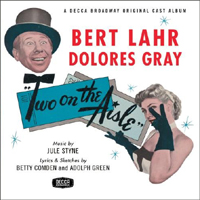 (5 / 5) How does a recording of a second-rank show become an irreplaceable treasure? Here’s how: By 1951, the big-star Broadway revue was beginning to gather up its stars and skits for a finale, largely due to competition from television variety shows. Nevertheless, Betty Comden and Adolph Green still had a few satirical tricks up their sleeves. In collaboration with composer Jule Styne, they came up with a smart throwback to the days of headliner-packed revues, and that’s where Two on the Aisle shone most brightly, in that it starred Broadway’s premier clown and one of the greatest singers ever to set foot on a stage. Nor were their tasks circumscribed, for Bert Lahr could sing (in a unique fashion) and Dolores Gray was an ace comedienne. There were also supporting actors, none of them too impressive, and a rather gruesome pair of singing lovers. Fortunately, the cast album focuses on Lahr and Gray in both musical and comedic modes, without conveying their well-documented backstage feud. All here is golden, or close to it: Lahr’s mock-Pagliacci ode to “The Clown”; the chorus’s “Show Train,” an amusing précis of then-current stage hits; and Lahr and Gray as a vaudeville team invading the Metropolitan Opera (“You’ll be Lucia,” he blusters, “and I’ll be Sextet”). Gray is sensational, her songs perfectly tailored to her fabulous singing — intimate yet volcanic, funny, sexy, and so technically accomplished (with that precise diction) that lieder recitalists should study it. Gray’s performance of “If (You Hadn’t but You Did)” alone earns her a place in the Broadway pantheon. — Richard Barrios