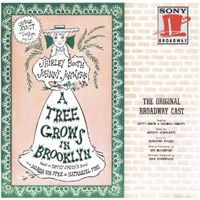 (4 / 5) With its high nostalgia quotient and dream ballet, this adaptation of Betty Smith’s beloved novel — scripted by Smith herself, with George Abbott’s help — may seem more like the work of Rodgers and Hammerstein than that of Arthur Schwartz and Dorothy Fields. Although A Tree Grows in Brooklyn didn’t quite recoup its investment during its eight-month run, the show felt like a hit at the time. And the cast album, produced by Goddard Lieberson with his usual finesse, captures the excitement of recording the score just after the rave reviews came in. Schwartz’s music shows his fine gift for evoking time, place, and mood in his songs, and Fields superbly captures the rough-and-tumble atmosphere of early-20th-century Brooklyn in her lyrics, which are poignant, salty, or hilarious by turns. As the tragic young Nolans, Johnny Johnston and Marcia Van Dyke are a bit on the dull side but are blessed with magnificent material, from his cocky “Mine ‘Til Monday” and “I’m Like a New Broom” to her pensive “Make the Man Love Me” and joyous “Look Who’s Dancing.” As sassy Aunt Cissy, Shirley Booth is occasionally off pitch but otherwise dead on, wringing every drop of bawdiness and poignancy from “He Had Refinement” and “Is That My Prince?” Some abrupt tonal shifts between comedy and tragedy betray the dramaturgical problems that may have contributed to the show not having a longer run, and a hokey hit-song finale fashioned especially for the recording was a mistake. Still, this is an overall excellent preservation of an undersung, affecting score. — Marc Miller