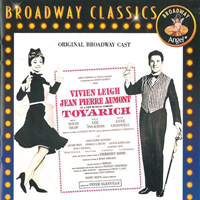 (3 / 5) In its CD and MP3 formats, this cast album is very different from the original LP edition in that, aside from the overture, no song is in the same position as it was on the original. Still, in any medium, Tovarich is a pleasant listen, with a score by composer Lee Pockriss and lyricist Anne Croswell. Film stars Vivien Leigh and Jean Pierre Aumont play the leads, Tatiana and Mikail, two Russian royals who flee to Paris after the revolution and hire themselves out as a butler and a maid. Most of the songs aren’t terribly dramatic, as their titles indicate: “You Love Me,” “The Only One,” “I Know the Feeling,” and “All for You.” But they’re all lovely, and they do have the right feel. Margery Gray and Byron Mitchell as the young adults in the household, who fall in puppy love with their new servants, have two undistinguished but fun songs together. And Mitchell gets to do a Charleston with Leigh in the tuneful paean to “Wilkes-Barre, PA.” — Peter Filichia