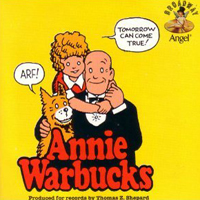 (3 / 5) Everyone’s favorite redheaded orphan sparkles once more in this Off-Broadway sequel to the Broadway mega-smash Annie. After a prolonged gestation period, Annie Warbucks emerged as neither a second golden egg nor a turkey. The cast recording has its share of appealing moments, thanks to capable Broadway pros Donna McKechnie and Harve Presnell and a full-sounding orchestra effectively delivering the Charles Strouse-Martin Charnin score. Things get off to a zippy start with “Annie Ain’t Just Annie Anymore” and “Above the Law.” The orphans are still livin’ la vida hard-knock and they have such spunky numbers as “The Other Woman” and “I Got Me.” Presnell displays his luxurious baritone in “A Younger Man” and “When You Smile.” A standout is the ballad “It Would Have Been Wonderful,” sung by Marguerite MacIntyre as Grace Farrell. One of the disc’s major assets is the plucky, high-belting Annie of Kathryn Zaremba. She anchors the recording with “Changes,” “I Always Knew,” and other bang-it-out songs. The single CD is housed in a double-disc case to accommodate the opulent, forty-eight-page color comic booklet that explains the story. Also included is a text-only synopsis for grownups and all of the show’s lyrics.  — Morgan Sills