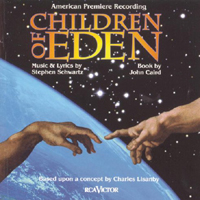 (4 / 5) Because of its biblical subject matter and the sheer amount of music and lyrics that Stephen Schwartz wrote for the piece, Children of Eden might be thought of as an oratorio rather than a musical, but it does have quite a bit of spoken dialogue. (The book is by John Caird.) This complete recording of the score is the cast album of a well-received production at the Paper Mill Playhouse in New Jersey. Act I tells the story of Adam and Eve, Cain and Abel in the Garden of Eden; Act II is about Noah and family before, during, and after the Ark. Both tales are given a postmodern psychological spin, showing how patterns of familial dysfunction are repeated down through the ages. Highlights of the score include the magnificent opening chorale, “Let There Be”; Eve’s “The Spark of Creation”; the lovely title song; and Cain’s soulful cry “Lost in the Wilderness.” The strong cast is headed by William Solo as Father (i.e., God), Adrian Zmed as Adam/Noah, Stephanie Mills as Eve/Mama Noah, Darius de Haas as Cain/Japheth, Hunter Foster as Abel/Ham, Vincent D’Elia as Seth/Shem, and Kelli Rabke as Yonah. Rabke does a fine job with “Stranger to the Rain” and duets persuasively with de Haas in another beautiful song, “In Whatever Time We Have.” As of this writing, Children of Eden has not had a commercial staging on or off Broadway in New York City, but it was given a fine concert performance at Riverside Church in 2003.  –– Michael Portantiere