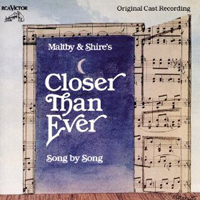 (4 / 5) To one set of critics, this four-person revue of songs by composer David Shire and lyricist Richard Maltby, Jr. was a long-overdue outpouring of material from a gifted, underappreciated team; to another, it was largely an evening of self-involved, spoiled yuppies whining in song. Both viewpoints are correct. The two dozen numbers on this double-CD set, representing the entire show, are impeccably crafted, with music and lyrics that are melodic, intelligent, humorous, and reflective. But many of the characters that sing them are unappealing: well-off, urban thirtysomethings yammering yards of pentameter about health crazes, Muzak, and personal discovery. So while there’s some first-rate stuff here — “Miss Byrd,” “One of the Good Guys,” “The Bear, the Tiger, the Hamster, and the Mole,” each the equivalent of a self-contained,  one-act play — there are also such odes to emotional self-indulgence as “Next Time,” “I Wouldn’t Go Back,” and “Like a Baby.” Uneven as the musical program is, there’s a saving grace in that this is one of the best-sung cast albums of the ’80s. Brent Barrett, at the peak of his powers, puts over even the second-tier songs with assurance and thrilling high notes. Sally Mayes’ natural warmth and comedic skill shine in “You Want to Be My Friend?” and “Back on Base.” The prodigiously talented Lynne Wintersteller’s “Life Story” is one of the most affecting show-tune tracks of the ’80s. Even Richard Muenz, normally a ham, keeps his preening in check until the heavy-breathing “If I Sing.” The cast is also splendid collectively — hear how gorgeously they harmonize in “She Loves Me Not” — and the album’s arrangements, augmented from the stage production to include a swinging combo, lend color. Closer Than Ever may have lacked the sense of discovery that marked the earlier Maltby-Shire revue Starting Here, Starting Now, but as a recording, it’s consistently better sung.  — Marc Miller 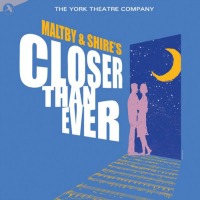 (4 / 5) The York Theatre Company revived Closer Than Ever in 2012, and the run of the show kept being extended, a hopeful sign that some theatergoers still have taste. The four vocalists — Jenn Colella, George Dvorsky, Christiane Noll, and Sal Viviano — are accomplished pros all, and Colella in particular pours a lot of feeling into everything she sings. But you may miss Lynne Wintersteller’s elegance and Brent Barrett’s high notes, and you’ll probably miss the other version’s orchestrations, here reduced to piano, bass, and drums. On the bonus side, we get two new Maltby-Shire songs. “There Is Something in a Wedding” feels schmaltzy coming from this duo, but “Dating Again,” the plaint of middle-aged singles diving back into the dating pool, is wry and wonderful. I’d go with the 1989 album if I could have only one, but there’s plenty of pleasure here as well. And the best of the songs hold up beautifully,  with lyrics discreetly updated in spots. –– M.M.