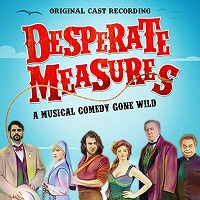 (3 / 5) People have adapted Shakespeare’s plays into musicals before, usually taking on the Bard’s hits. Librettist/lyricist Peter Kellogg and composer David Friedman chose one of the “problem plays,” Measure for Measure — a complicated stew of morality, corruption, and justice, with not much comedy in it. Kellogg and Friedman dropped their characters in Old West Arizona,  and ramped up the sex (keeping the famous “bed trick”) and fun. The result, Desperate Measures, is a raucous, bawdy, old-fashioned musical comedy. The album can’t supply the sight gags, but the performers have great comedic chops, and they land every punch line in Kellogg’s lyrics. Friedman has called his score “Jewish country,” but it’s charmingly varied despite the dominant Western twang. “It Doesn’t Hurt To Try” is a hoedown with banjo and fiddle; “Someday They Will Thank Me” is a comic patter number for the villain, the sleazy governor (Nick Wyman, with a outrageous German accent); and the first act finale, “In the Dark,” is a complex choral piece set to a rhumba rhythm. The scene-setting opener, “The Ballad of Johnny Blood,” is an over-the-top homage to the themes of classic Western TV shows and films like Rawhide and The Good, The Bad, and the Ugly. Broadway influences are present, too, including small nods to Oklahoma! and a big one to Annie Get Your Gun with the best comic challenge duet since “Anything You Can Do”:  In “Just For You,” Johnny (Conor Ryan) and saloon girl Bella (the uproarious Lauren Molina) argue over how far each would go in the name of love. (“I slept with another guy, just for you.” “Shot a man and watched him die, just for you.”) Molina also shines in her saloon striptease, “It’s Getting Hot In Here,” and in the duet “The Way That You Feel,” as novice nun Susanna (Emma Degerstedt, with a lovely soprano) instructs her how to be less risqué for the bed trick. Overall, this is a spirited score with heart. — Laura Frankos