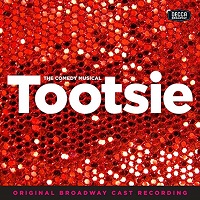 (3 / 5) Librettist Robert Horn and composer/lyricist David Yazbek made some wise moves in translating the popular 1982 comedy film Tootsie into a stage musical — for example, shifting the milieu from a soap opera to a present-day Broadway musical in trouble. The focus remains on Michael Dorsey (Santino Fontana), a jerk of an actor whose desperation leads him to impersonate a woman (“Dorothy Michaels”) to land a role. Michael’s frustrations and hopes are echoed by his better-behaved show biz colleagues, as Yazbek’s brash and brassy score reveals the vicissitudes of the actor’s life. The ensemble expresses joy in “I Like What She’s Doing” when their show starts to improve in rehearsals, and opening night nerves in “The Most Important Night.” Julie Nichols (Lilli Cooper), the actress cast opposite Dorothy in the musical, Juliet’s Nurse, relates the toll that acting takes on personal relationships in the poignant “There Was John.” Sandy (Sarah Stiles), Michael’s neurotic ex-girlfriend, unloads her audition anxieties (“What kind of masochist keeps coming back for more?”) in the rapid-fire mambo number “What’s Gonna Happen.” The song is not quite a match for “Model Behavior” in Yazbek’s Women On The Verge Of a Nervous Breakdown, but it’s easily the funniest number in the score. During all of this, Michael’s roommate Jeff (Andy Grotelueschen) acts as a fresh, raunchy facet of Michael’s conscience. Fontana’s dual roles come alive through his vocal skills, and he nails Michael’s progression. At first, he’s an annoying narcissist making terrible choices, cleverly conveyed in “Opening Number” and “Whaddya Do.” Next, he’s an “Unstoppable” stage success as Dorothy, starting with the diegetic anthem “I Won’t Let You Down.” This serves as Dorothy’s killer audition — Fontana builds and builds triumphantly — and also hints at how “she” will help the show within the show. While the songs reflect Michael’s growth, they’re less successful at showing how Dorothy affects those around her. This isn’t Yazbek’s strongest score, but it serves the comedy of the plot very well. — Laura Frankos