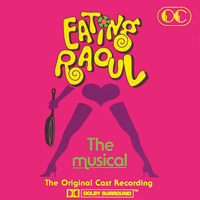 (4 / 5) Paul Bartel wrote the book for this musicalization of his cult-classic film, and he found ideal collaborators in lyricist Boyd Graham and composer Jed Feuer. Their score displays the same campy, goofy insanity as the flick. This tale of a couple repulsed by sex who join with a Mexican stud in a scheme to murder swingers in order to raise cash to buy a restaurant (really, don’t ask!) is told through a series of terrific, often hilarious numbers. Among them are the title song (the title phrase of which is rhymed with “kids in school,” “don’t be a fool,” and “rabbis in shul”), and two great trios,  “Think About Tomorrow” and “Trio.” There is also a pair of late-show knockouts: a song-and-dance number called “Momma Said,” performed by a large man in a flowing dress, and the 11-o’clock stunner “One Last Bop.” Everything is well sung by the cast of nine, led by Eddie Korbich, Courtenay Collins, and Adrian Zmed. M. W Reid plays the guy in the dress, among other characters. Joseph Gianono’s orchestrations are overly synthesized — the band consists of two keyboards, guitar, bass, and percussion — but that doesn’t mask the undeniable fun of the score.  — Seth Christenfeld