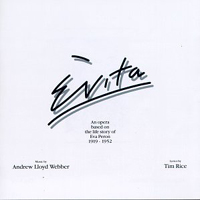 (4 / 5) This final collaboration (to date) of composer Andrew Lloyd Webber and lyricist Tim Rice is also the last really good musical theater piece to come from ALW’s pen. Evita is based on the life of Argentinean dictator Juan Peron’s wife, Eva Peron, who was idolized by the nation and perhaps was as powerful as her husband. The score is bursting with scintillating melodies and exciting rhythms, written in a modified rock idiom. Although that idiom is historically inaccurate for a musical in which the action takes place between 1936 and 1952, and literal-minded listeners may balk at the anachronism, the songs are wonderfully enjoyable in their own right. There’s also a piquant Latin tinge to some of the tunes. Singing the tour-de-force role of Evita, Julie Covington is very much in the rock mode — as one listener amusingly but accurately put it, “she tends to sound like Patti Smith” — but her performance is dynamic, committed, and highly theatrical. As Che, a character based on Che Guevara, C. T. (later Colm) Wilkinson is terrific. Paul Jones sounds too young, too attractive, and too straightforward for the role of Juan Peron, but Tony Christie as Magaldi and Barbara Dickson as Peron’s mistress contribute vivid, well-sung cameos. Among the recording’s best tracks are Covington’s soulful delivery of the gorgeous “Don’t Cry for Me Argentina” and her full-throttle belting of “Buenos Aires”; the caustic “Waltz for Eva and Che”; Dickson’s lovely, plaintive rendition of “Another Suitcase in Another Hall”; and the haunting “High Flying Adored,” another great Eva-Che duet. Throughout the recording, the London Philharmonic sounds magnificent as conducted by Anthony Bowles. When the full orchestra really lets loose for the first time in “Requiem for Evita,” the torrent of sound is worthy of what was, by many accounts, the funeral of the century. — Michael Portantiere 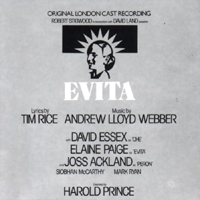 (2 / 5) Elaine Paige has one of the greatest musical theater voices ever, but much of her performance on this cast album of the world premiere stage production of Evita is disappointing. It almost sounds as if she’s holding back at times so as not to blow out her voice. To give only one example: When she reaches the high-lying bridge of “Buenos Aires,” she finesses the passage rather than delivering it in the gleaming, full belt for which she’s famous. It’s understandable that Paige would make vocal adjustments to get through eight performances a week of this killer role onstage, but its hard to imagine why she didn’t give her all for the recording. The other featured soloists — David Essex as Che, Joss Ackland as Peron, Mark Ryan as Magaldi, Siobhan McCarthy as Peron’s mistress — are fine, but their roles have been more persuasively recorded by others. Another big strike against the album is that it presents only highlights of the score, so while it holds some interest as the first recording of the highly successful stage version of Evita that was created from the concept album by director Hal Prince, orchestrator Hershy Kay (working with Lloyd Webber), et al., the album to all intents and purposes has been superseded by the one reviewed immediately below.  — M.P. 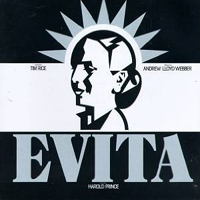 (5 / 5) With her amazing, industrial-strength singing voice and serious acting chops, Patti LuPone might have been born for the part of Evita. She belts “Buenos Aires,” “A New Argentina,” and other songs to thrilling effect, yet she’s vulnerable and moving in “Don’t Cry for Me, Argentina,” “Eva’s Final Broadcast,” and “Lament.” Simply put, she’s definitive in this role. Mandy Patinkin brings to Che a unique combination of sweet, Irish-tenor-like high notes and a cantorial geshrei when he belts. Bob Gunton gives a sly, skillful performance as Juan Peron; he leads “The Art of the Possible,” a neat song that wasn’t on the concept album of Evita, and he has great chemistry with LuPone in “I’d Be Surprisingly Good for You” and “Dice Are Rolling.” As Peron’s mistress, Jane Ohringer offers a lovely lyric-soprano rendition of “Another Suitcase in Another Hall” — and she really does sound like a teenager, which helps the song dramatically. Mark Syers, who died in a car accident about four years after this recording was made, is a fine Magaldi. The more rock-like sounds of the original arrangements and orchestrations were toned down for the stage version of the score; for example, the electric guitars in “Requiem for Evita” are replaced by trumpets. Also, the aggressively anachronistic rock ‘n’ roll number “The Lady’s Got Potential” is gone entirely. The orchestra, augmented for this recording, sounds huge and exciting under music director Rene Wiegert. If you want only one recording of Evita in your collection, this is the one to choose.  (Note that it is actually labeled the “Premiere American Recording” of the score and was recorded in Los Angeles, where the show played prior to reaching Broadway.) — M.P. 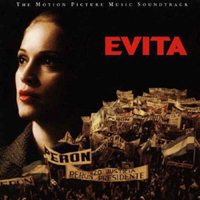 (2 / 5) A film version of Evita was in the planning stages for years. When the movie was finally ready to roll with Madonna as Eva Peron, there was widespread consternation at the casting, since none of the pop star’s recordings gave any reason to believe that she’d be able to handle the vocal demands of such a difficult, rangy role. As it turned out, much of the score had to be transposed downward and rearranged for her to get through it. Not surprisingly, Madonna sounds best in the less demanding sections. Although “Don’t Cry for Me Argentina” takes some getting used to in a lower key, she sings it pretty well if not with great feeling. She also does an okay job with “Another Suitcase in Another Hall,” but it’s unfortunate that this lovely song was taken away from the one-scene character of Peron’s mistress in order to give Eva/Madonna another number. The star flattens some of the rhythms in “Eva and Magaldi”/”Eva, Beware of the City” (Jimmy Nail sings Magaldi), and she also seems to have some pitch problems in this sequence, although the music keeps modulating so wildly to accommodate her limited vocal range that it’s hard to be sure. Also, Madonna gets the vowels and diphthongs of the words “Buenos Aires” all wrong, rendering the city name as if it were spelled “Buenes Arres.” For a plausible Spanish accent, look to Antonio Banderas, who sings Che’s songs with charisma, passion, and beautiful tone. Jonathan Pryce is an authoritative presence as Juan Peron — a brilliant bit of casting. As presented here, the score sounds a lot like it does on the concept album. There are some twanging electric guitars in the “Requiem” and “The Lady’s Got Potential,” the latter song reinstated with new lyrics, and these sounds are not all of a piece with some more authentic re-scoring for acoustic guitar and accordion. The movie and its soundtrack album are notable for including a new Lloyd Webber-Rice ballad, “You Must Love Me” — yes, another song for Eva/Madonna! As conducted by John Mauceri, David Caddick, and Mike Dixon, the orchestral score sounds impressive despite the more obvious instrumental anachronisms and the jarring transpositions and modulations for the leading lady. — M.P. 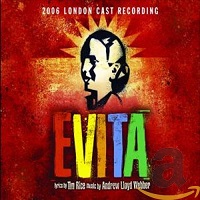 (1 / 5) When Evita returned to the West End in 2006, much was made of the fact that the title role was being played by a real Argentinian, Elena Roger. Unfortunately, based on this cast recording, that neat element of authenticity doesn’t by any means compensate for the fact that Roger’s singing voice is not up to the demands of this extremely challenging role in terms of range or, arguably, tonal quality. Also, while Evita is set in Argentina, the musical was written in English, not Spanish, so Roger’s fairly thick accent is another issue throughout. The Peron in this production is Philip Quast, a longtime stalwart of the London musical stage. He’s one of the best Perons on records, and Matt Rawle is a strong Che — though, here again, their natural Brit accents prompt the question of why Roger’s Evita should sound Argentinian if none of the other performers/characters do. You can give this recording a listen if you think it sounds interesting to ponder such matters, but the vocal over-parting of Roger as Evita may cause you to feel that it doesn’t need to be added to your permanent collection. — M.P. 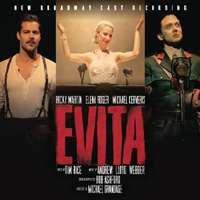 (1 / 5) Elena Roger did receive some acclaim for her title role performance in the 2006 London revival of Evita, but when she came to Broadway as Eva Peron, many critics and audience members found her singing voice unequal to the assignment — however persuasive she was as an actress, and no matter how “authentic” as a real-life Argentinian. Conversely, although former pop star Ricky Martin displayed almost no acting talent as Che, moving through the entire show with the same smirk on his face no matter what was happening in the plot, he sang the role well from a purely musical standpoint. So, on the cast recording, Martin’s performance is enjoyable but Roger’s is not; one of her most unfortunate moments is the section of “Buenos Aires” that begins with the lyrics “And, if ever I go too far,” sung with wispy, breathy tone that makes even Elaine Paige’s recording preferable. Broadway stalwart Michael Cerveris is excellent as Peron, while Max von Essen and Rachel Potter respectively make the most of the small roles of Magaldi and Peron’s young mistress. The cast album has other pluses, but any recording of this score with a singer whose sound is so wanting in so much of Evita’s music will be judged by many listeners as not worthwhile — M.P.