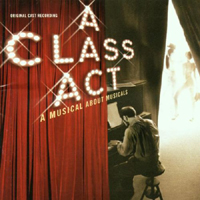 (3 / 5)  A Class Act represents an important bit of modern musical theater history, and this recording of the Manhattan Theatre Club production is an intriguing artifact, documenting the original, intimate approach to the material that was changed when a move to Broadway necessitated bigger laughs, bigger emotions, and bigger orchestrations. The show is a warmhearted tribute to composer-lyricist Edward Kleban, who died in 1987. For those who know only his work as the lyricist of A Chorus Line, the fine handle on composition that Kleban displays here may come as a surprise. The songs assembled for A Class Act — orchestrated by Larry Hochman under Todd Ellison’s musical direction — show Kleban’s impressive talent in dealing with a variety of subjects, ranging from music and musicals (“One More Beautiful Song,” “Charm Song”) to the City of Lights (“Paris Through the Window”) to the complexities of human relationships (“Under Separate Cover,” “Self Portrait”). There are also a couple of traditional, all-out showstoppers: “Gauguin’s Shoes” and “Better.” A fine, laid-back band and an eight-person cast led by director Lonny Price (as Kleban) and Carolee Carmello give all of the songs wonderful performances, but Tony-winner Randy Graff steals the show and listeners’ hearts with her emotional renditions of the score’s most sensitive numbers, including one true classic: “The Next Best Thing to Love.”  — Matthew Murray