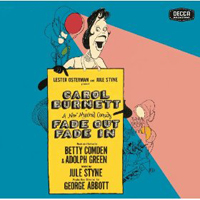 (1 / 5) This musical spoof of Hollywood in the 1930s is best known for its star’s attempts to bail out of it. Betty Comden and Adolph Green tailored the book to the comic talents of Carol Burnett; she plays a Broadway chorine who’s packed off to Hollywood and transformed into screen legend Lila Tremaine. When Burnett began missing performances and tried to buy out her contract, the show closed, reopened, and quickly closed again. Comden and Green’s lyrics here seem a little tired, and though Jule Styne’s music is always professional, this is far from his best score. Burnett gets the most out of her numbers, including the witty “Call Me Savage,” in which the chorine is reinvented as a sex symbol; the defiant “Go Home Train”; and “You Musn’t Be Discouraged,” in which the star riotously spoofs Shirley Temple while Tiger Haynes conjures Bill “Bojangles” Robinson. The rest of the cast — including Jack Cassidy as a narcissistic leading man, Lou Jacobi as the neurotic studio boss, Tina Louise as a dim starlet, and Dick Patterson as Burnett’s love interest — are all fine, and the orchestrations by Ralph Burns and Ray Ellis are bouncy. Still, this is the sort of thing that Burnett did better a few years later on her TV variety series. — David Barbour