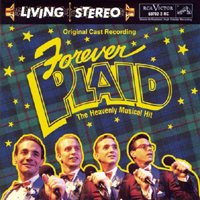 (4 / 5) In its New York incarnation, Steve Ross’s “Heavenly Musical Hit” Forever Plaid was, if you’ll pardon the expression, a divine tribute to  the close-harmony-group singing of the Brill Building-era. The book is about a “guy group,” the Plaids, whose four members perished in a car crash on their way to pick up custom-tailored plaid tuxes for a gig that should have been their first big break. The date was February 9, 1964, and the Plaids were slammed broadside by a school bus filled with Catholic teens bound for Manhattan to join the studio audience for the Beatles’ debut on The Ed Sullivan Show. Now, “through the power of harmony and the expanding holes in the ozone layer in conjunction with the positions of the planets and all that astro-technical stuff,” the deceased Plaids have returned to perform the big show they never got to do. Forever Plaid ran on the Upper West Side for years. Under the direction of creator Ross, who also choreographed, the show’s original cast — Stan Chandler (tenor), David Engel (bass), Jason Graae (baritone), and Guy Stroman (tenor) — was wonderful. The recording was produced by the show’s musical director, James Raitt, with Bill Rosenfield supervising for the label; it captures the performers’ unimpeachable intonation, as well as their verve and comedic flair. The show is a rare combination of wit, hokum, double entendres, and assured musical taste, and in the hands of the original ensemble, it was even touching. The medleys combining “Gotta Be This or That” with “Undecided” (featuring Graae) and “Shangri-La” with “Rags to Riches” (featuring Engel) are standouts, but there’s not a dud track on the disc, which also includes what is surely the most clever, delicious rendition of the Hoagy Carmichael-Frank Loesser chestnut “Heart and Soul” (here featuring Stroman) ever heard. During the 1990s, Forever Plaid became a fixture in several major cities and toured the hinterlands, providing employment to an army of young Equity actors. This cast album is a wonderful souvenir of the original Off-Broadway company. — Charles Wright 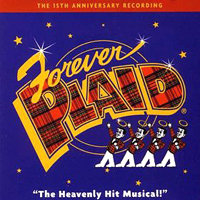 (4 / 5) Steve Ross’s feather-light revue may be more than a quarter century old, but its selection of mid-century pop songs is forever fresh. If the show’s narrative conceit isn’t also evergreen, that’s likely because subsequent revues have attempted to conjure the Plaid magic and fallen short. (The Marvelous Wonderettes comes immediately to mind, because of the misbegotten 2016 Off-Broadway revival.) Ross is famously proprietary about his franchise, and he has wisely ensured that each iteration of the Plaids — even the Christmas version — is faithful in form and execution to the original. The Las Vegas production preserved on this recording, the second Vegas run of the show, opened in February 2005 and played the Gold Coast Hotel & Casino for two years. The cast consists of Bruce Ewing (Jinx), Doug Frank (Smudge), Mark Perkins (Frankie), and Dale Sandish (Sparky), with J. Gregory Davis as the alternate for Frankie, Smudge, and Sparky. All five men perform on the recording. Admirably precise in intonation and harmony, they replicate the exuberance and naïve charm of the four pros who originated the roles in New York,  although in appearance they’re more — umm, how to say it? — mature than their predecessors. David Kanscar on piano and Ken Seiffert on bass make a glorious noise to accompany and complement the fine vocals. As conductor, Kanscar maintains the style, tempi, and dynamics of James Raitt’s expert 1990 musical direction. Produced by Hugh Fordin and Richard Martini, the recording is effectively mixed and features superb aural quality. If a second Forever Plaid is essential for only the most comprehensive collections, the Las Vegas cast recording is a fine alternate for the original. Let’s rejoice that what’s been plaid in Vegas doesn’t have to stay in Vegas! — C.W.