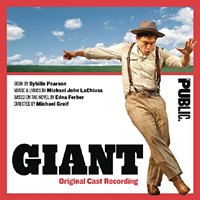 (4 / 5) Texas is big. Edna Ferber’s 1952 novel, Giant, is big, spanning decades and two generations of rancher families. The 1956 movie version is big, with spurting oils wells and thundering cattle herds (plus a stunning young Liz Taylor and a sultry James Dean). How to translate something so gigantic to the stage? By going big with the score. Giant may not be Michael John LaChiusa’s most important musical, but it’s his most melodic, alternately sweeping and introspective. This recording is jam-packed with 26 songs from the three-hour show: Mexican folk songs, country hoedowns, ballads of hope and regret, swing, and early rock. (LaChiusa subtly mirrors changing musical tastes as the story moves from 1925 to 1952.) Linking the various parts of the whole is the anthem “Heartbreak Country,” for at its heart, Giant is the tale of that land — the Reata Ranch — and how it changed through the years, affecting everyone connected with it. At the center is the owner, Bick Benedict (the wonderful Brian D’Arcy James), who, like his older sister Luz (Michele Pawk), loves Reata and is always aware of his obligation to “take care of the land.” Yet, instead of marrying the daughter of a neighboring ranch owner, he weds an educated Virginian, Leslie (Kate Baldwin). LaChiusa chronicles their relationship in nine telling numbers. “Your Texas” is about Leslie’s dreams during their courtship, including a kind of frontier utopia. The lilting “Did Spring Come To Texas?” reveals Bick’s joy at their wedding. Things don’t always run smoothly, not with Luz’s interference and sexy mechanic Jett (PJ Griffith) hanging around; but there is genuine love here, and Bick and Lesie try repeatedly to work out their differences (“Heartbreak Country,” “Topsy Turvy”). A major issue is the treatment of the Mexicans who work the ranch, once Mexican property (“Aurelia Dolores”). The racism appalls Leslie, and her views are shared by the couple’s bookish son, Jordy (Bobby Steggart), who loves Juana (Natalie Cortez). Things reach a crisis in the climactic “The Desert,” a musical sequence (with dialogue by librettist Sybille Pearson) that’s a mini-play in itself.  Others — there are nearly a dozen significant characters — play their roles in this changing Texas. Griffith works hard to distance himself from Dean’s iconic portrayal; his rock growl helps. Pawk’s Luz is perhaps overly villainous in “No Time For Surprises,” but fares better in her duets with Bick. John Dossett and Katie Thompson each get strong solos as Bick’s uncle and the girl Bick jilted for Leslie. The younger generation — Steggert,  Cortez, Miguel Cervantes, and Mackenzie Mauzy — have their own chances to shine as well, notably in the bouncy “Jump” and the tender “There Is A Child.” This is a rich, vibrant score, loaded with emotion and power. — Laura Frankos