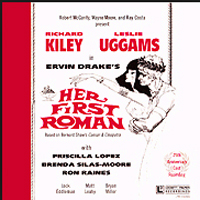 (1 / 5) Ervin Drake’s score for this show doesn’t actually contain terrible songs; it’s just that they’re terrible for an adaptation of George Bernard Shaw’s Caesar and Cleopatra. The title of the opening number, “What Are We Doing in Egypt?”, might well prompt us to ask: What are these songs doing in Egypt? That mismatch is probably why a quarter-century had to pass before someone made a full-fledged recording of this 1968 flop. As Caesar, Richard Kiley sings of being in “The Dangerous Age,” where he’s smitten with the sex-kitten Cleopatra, played by Leslie Uggams. Her songs include “I Cannot Make Him Jealous (I Have Tried),” with its frustrating stop-and-start melody; “Many Young Men From Now,” which sounds like a running-up-and-down-the scale vocal exercise; and, most atrociously, “The Wrong Man’s the Right Man for Me,” which calls to mind a snazzy nightclub song. Similarly, the title song is far too Jerry Hermanish for the period — not to mention that a Shaw-inspired musical should have opted for a more elegant title. Just when the listener is convinced that things could not possibly get worse, out comes the most awful item of all: “I Fell in With Evil Companions,” an anachronistic rouser that Caesar and his soldiers sing for no apparent reason. It was dropped during the Boston tryout, but it’s included here for better or worse — with an emphasis on the latter. — Peter Filichia