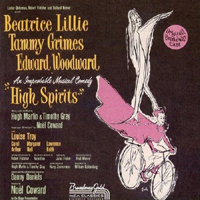 (3 / 5) Noël Coward’s martini-dry farce Blithe Spirit was turned into a brassy, uptempo musical by songwriters-librettists Hugh Marrin and Timothy Gray. If the result is a bit disconcerting, it’s still a droll entertainment. (Coward himself directed.) Edward Woodward is Charles Condomine, whose experiments with spiritualism accidentally conjure the spirit of his first wife, Elvira (Tammy Grimes), much to the horror of his current spouse, Ruth (Louise Troy). Along for the ride is Beatrice Lillie as the bizarre medium Madame Arcati. The songs are generally very aggressive — Harry Zimmerman’s orchestrations are hell-bent on turning this piece of fluff into a blockbuster — yet they’re also witty and melodic. Grimes gets the choice material, including the lighthearted warning “You’d Better Love Me,” the introspective”Something Tells Me,” and the wacky jet-set spoof “Faster Than Sound.” She absolutely sizzles when describing her social life on the astral plane in “Home Sweet Heaven” (“Delilah’s dreary / But Samson’s handsome / And with his good looks / Robin Hood looks fit for ransom”). Some fans of Lillie claim that you had to see her perform to get her, but she’s fun in her recordings of “Go Into Your Trance” and “Something Is Coming to Tea,” and especially when singing sweet nothings to her Ouija board in “Talking to You.” In less flamboyant roles, Woodward and Troy are models of urbanity.  — David Barbour 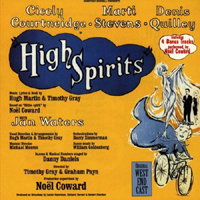 (3 / 5) Coward tried again, this time without Lillie, and what was a nervous hit in New York was a flat-out flop in London. The cast album isn’t bad, but it lacks the exciting personalities of the New York original. Tammy Grimes, with her smoky voice and singular delivery, is much missed. Her replacement, Marti Stevens, does not for a moment suggest the eccentric, ectoplasmic Elvira. Cicely Courtneidge is fun as Madame Arcati, and Dennis Quilley is a really first-rate Charles,  but Jan Waters as Ruth lacks Louise Troy’s apt, world-weary manner. Still, the recording is worthwhile for several reasons: “Home Sweet Heaven” has some new, even more riotous lyrics (“The King of Prussia / I call him Freddy / Is living by mistake / With Mary Baker Eddy”), and a set of bonus tracks features Coward himself singing “Something Tells Me,” the ballads “If I Gave You” and “Forever and a Day,” and what may be the definitive version of “Home Sweet Heaven.” — D.B.