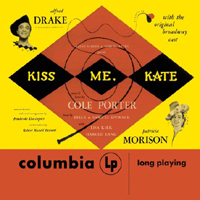 (5 / 5) Here is Cole Porter’s greatest score — fresh, groundbreaking, and oh, so naughty. The show’s book, by Bella and Sam Spewack, has a rousing backstage plot matched by a spirited play-within-the-play: Shakespeare’s The Taming of the Shrew, which turns up in excerpts here and there, giving the principals dual roles. As Fred/Petruchio and Lilli/Kate, the great stars Alfred Drake and Patricia Morison are at their professional peak on the cast album; they deliver every word distinctly, and caress every note. As Lois/Bianca, Lisa Kirk acts and sings her numbers impeccably; her performance of “Why Can’t You Behave?” is unsurpassed as her sultry voice pours over great lines such as, “There I’ll care for you forever / Well, at least till you dig my grave.” Porter’s raunchy lyrics for “Always True to You in My Fashion” are also meticulously rendered by Kirk. Harold Lang is on hand as Bill/Lucentio to sing the silly but charming “Bianca.” Pembroke Davenport conducts skillfully. Kiss Me, Kate contains several songs that have become famous: “So in Love,” “Wunderbar” “Another Op’nin’, Another Show,” “Too Darn Hot,” and one of the cleverest comedy numbers ever written for the stage, “Brush Up Your Shakespeare.” And let’s not forget the delightfully nasty “I Hate Men,” performed here by Patricia Morison as if she really means it. [Note: Kiss Me, Kate opened on December 30, 1948, but the cast recording was actually made in January 1949.] — Gerard Alessandrini 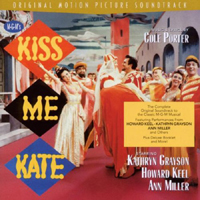 (5 / 5) MGM gave Kiss Me, Kate the royal treatment. The soundtrack is thrilling, even if this is more a flashy movie musical than a faithful transfer of the stage show. As Fred/Petruchio, Howard Keel sings with bravura. Katherine Grayson as Lilli/Kate is less satisfying; her vocal trills are pretty, but she doesn’t have the acting or belting chops for “I Hate Men.” The cast member who shines the brightest here is Ann Miller as Lois/Bianca. Besides being a great dancer, Miller was also a fine singer, and her brassy renditions of “Always True to You in My Fashion” and “Too Darn Hot” are terrific. Another delight is the musical scoring by Saul Chaplin and André Previn. Although the treatment is as Hollywoodish as can be, Porter’s splendid melodies and urbane lyrics shine through. The stage score was transferred to the screen almost in its entirety; “Another Op’nin’, Another Show” and “Bianca” were dropped (parts of both are still heard as background music), but another great Porter song was added, “From This Moment On.” That track alone is worth the price of the soundtrack recording, but Rhino’s expanded CD includes the entire film score in glorious early stereo. — G.A. 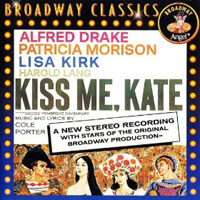 (5 / 5) In many ways, this recording is nearly identical to the original cast album made 10 years earlier, the only major difference being that this version is in stereo. The stars of Kiss Me, Kate reunited to re-record the score in state-of-the-art, “Full Dimensional Stereo” soon after the airing of a CBS-TV version of the musical that starred Alfred Drake and Patricia Morison. The telecast featured Bill Hayes as Bill! Lucentio and Julie Wilson as Lois/Bianca, but this studio cast recording brought back Lisa Kirk and Harold Lang, along with the Broadway conductor, Pembroke Davenport. All of the performances are as fresh and vibrant as on the original album; except for the improved sound quality, it’s sometimes hard to tell one version from the other. But the orchestra seems augmented a bit here, and original cast member Lorenzo Fuller as Paul the valet gets to lead “Another Op’nin’, Another Show” in addition to “Too Darn Hot.” P.S.: The show’s gangster roles are sung by Aloysius Donovan and Alexis Dubroff, both a.k.a. Alfred Drake! — G.A. 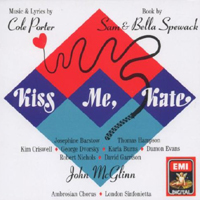 (3 / 5) Conductor John McGlinn spearheaded this recording of Kiss Me, Kate, starring Josephine Barstow and Thomas Hampson in an edition that’s less effective than other recorded performances of this great show. Still, it was an important aural document when it appeared in 1990, because of its completeness. In addition to the original overture, the album offers every verse of every song and fully orchestrated versions of songs dropped from the show before it opened, plus an excellent booklet filled with background information. Hampson and Barstow are magnificent opera singers, but a Cole Porter score needs performers with a more theatrical edge. Kim Criswell is also a wonderful talent, but is miscast as Lois/Bianca. George Dvorsky, David Garrison, and Davis Gaines are effective in their roles. On the whole, this recording sounds somewhat cold, and it ultimately short changes the jazzier, wittier aspects of the score. — G.A. 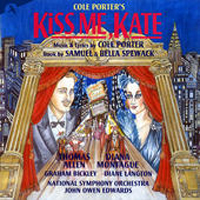 (4 / 5) Here’s another complete recording of the score. Thomas Allen and Diana Montague are well cast as Fred/Petruchio and Lilli/Kate, with beautiful voices that never overpower the songs and acting that suits the material nicely. Diane Langton as Lois/Bianca is somewhat less effective vocally and comically, but Graham Bickley as Bill!Lucentio is quite appealing. The score is excitingly conducted by john Owen Edwards; his tempi are bright and bouncy, and the orchestra sounds full and lush. The complete, original Robert Russell Bennett orchestrations are heard in all of the jazzy dance numbers, the overture, and the entr’acte, plus the scene-change music and underscoring. This two-disc set also contains bonus tracks of the overtures to Porter’s Can-Can, Jubilee, and Out of This World. — G.A. 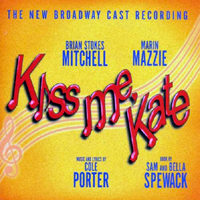 (4 / 5) The stellar performances of Brian Stokes Mitchell and Marin Mazzie help to make this a delightful cast album. Although the score was re-orchestrated for a smaller number of instruments, Cole Porter’s music still sounds great, and this Broadway revival proved that the story and songs hadn’t aged a bit. Mazzie’s rendition of Lilli’s “So in Love” is a particular standout as she captures all of the angst and passion inherent in one of Porter’s greatest love songs. Mitchell does an especially fine job with Fred’s/Petruchio’s numbers; his rendition of “Were Thine That Special Face” is at once poignant and thrilling. On the comedy side, Mazzie takes the honors with a wonderfully overwrought version of Kate’s “I Hate Men.” Amy Spanger and Michael Berresse are somewhat less effective as Lois/Bianca and Bill/Lucentio on this recording than they were onstage, but the entire cast, including Michael Mulheren and Lee Wilkof as the gangsters, performs with great vigor. If you’re looking for an excellent contemporary interpretation of this timeless show, look no further. — G.A.