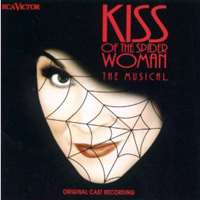 (5 / 5) Surely one of the most original and haunting musicals of the ’90s, Kiss of the Spider Woman is also one of the strangest and most surreal shows ever to enjoy a long Broadway run. Terrence McNally’s adaptation of Manuel Puig’s novel and film unfolds with the terrible logic of a dream. The action is set in a prison in an unnamed Latin American country: Brent Carver is Molina, a gay window dresser under arrest for having had sex with a minor; his cellmate is Valentin (Anthony Crivello), a fierce, homophobic revolutionary. Their relationship is complex, sexually charged, and fraught with ambiguity. Hovering over them both is Aurora, the film goddess of Molina’s fantasies, who is also the Spider Woman — the spirit of death — played by Chita Rivera. The drama moves in and out of the prison cell into a series of movie narratives, dreams, and memories that enmesh both men in a web of seduction, treachery, and death. The astonishingly rich score, by composer John Kander and lyricist Fred Ebb, captures every shifting mood and level of reality. “Dressing Them Up” and “I Draw the Line” establish the troubled Molina-Valentin relationship clearly. “Dear One” is a gorgeous quartet for the two men plus Molina’s mother (nice work by Merle Louise) and Valentin’s girlfriend. Marta (Kirsti Carnahan). Equally fine is the heartbreaking “You Could Never Shame Me,” also featuring Molina’s mother. There is room for wild movie parodies (“Gimme Love,” “Russian Movie/Good Times”) and such dark, surreal numbers as the “Morphine Tango.” On the minus side, the score is afflicted with an overblown anthem, “The Day After That.” Carver and Crivello are first-rate, but the miracle here is Rivera. She was a stunning presence in the show — alternately campy, sinister, maternal, and mysterious. On the recording, she’s particularly electrifying in “Where You Are,” a creepy yet hilarious portrait of the movies’ power to obliterate reality (brilliantly orchestrated by Michael Gibson). Rivera is also alluring and frightening in “I Do Miracles,” and commanding in the sinister title song. She, and this recording, are simply not to be missed. — David Barbour 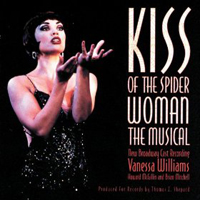 (3 / 5) Few replacement casts get their own cast albums, but Vanessa Williams was a popular recording artist when she went into Kiss of the Spider Woman as Aurora. Hence, this disc. Something is lost and something gained here. Williams’ singing is formidable, but her performance falls short. Aurora isn’t really a character; she’s an idea, a projection of Molina’s fantasies about the movies, his feelings about his mother, his fascination with death. Chita Rivera brought every watt of her star power to bear in the role, with memorable results; Williams simply doesn’t have the same overwhelming personality. On the other hand, Brian Stokes Mitchell is Valentin here, and the power of his voice is, as always, stupendous. He even makes something stirring out of “The Day After That.” As Molina, Howard McGillin is a little too leading mannish — Brent Carver was far closer to the desperately sad character envisioned by Terrence McNally and Manuel Puig — but his singing is beyond reproach. Don’t go out of your to way to find this recording, but if you’re a Williams fan, you’ll certainly enjoy it. — D.B.