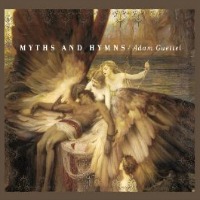 (4 / 5) Composer-lyricist Adam Guettel’s song cycle Saturn Returns had a brief run at The Public Theater but never got an original cast album. Myths and Hymns comes pretty close, as this recording contains most of the show’s songs (which include additional lyrics by Ellen Fitzhugh) and features the original cast joined by three more wonderful performers: Billy Porter, Audra McDonald, and the dulcet-toned composer himself. The album delivers what the title promises, offering Guettel’s unique perspectives on Greek myths, musical settings of obscure hymnal lyrics, and original hymns. Most of the mythic songs are humorous, modern psychological deconstructions of such legends as the one about Icarus, while the hymns capture both the optimism and anguish of spiritual belief; listen to Porter’s fiery “Awaiting You” for the best example of the latter. One of the most striking pieces concerns an abortion. The style of composition varies greatly, from the funky electronics of “Icarus” to the joyful gospel sound of “There’s a Shout,” the angular “Children of the Heavenly King,” and the soaring “Migratory V.” “Hero and Leander” is a ravishing romantic ballad, and even more compelling is “Saturn Returns,” a musical monologue in which the composer laments: “I don’t know what I hunger for, I only know I feel the hunger more and more with every passing day.” — Brooke Pierce