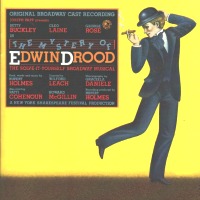 (3 / 5) Composer-lyricist-Iibrettist Rupert Holmes folded a tribute to the English music hall into his adaptation of Charles Dickens’ unfinished novel The Mystery of Edwin Drood, and he came up with an intriguing musical whodunit. The original cast, as preserved here, is exemplary; it includes the great George Rose and the one-of-a-kind Cleo Laine, along with heavy-hitting Broadway pros Howard McGillin, Patti Cohenour, Judy Kuhn, Donna Murphy, and belter extraordinaire Betty Buckley in the title role. “The Wages of Sin” is a specialty number delivered stylishly by Laine, and the haunting “Moonfall” is beautifully rendered by Cohenour. Other standouts are the boisterous opening number, “There You Are”; the breathless “Both Sides of the Coin”; the exciting “Don’t Quit While You’re Ahead”; and the finale, “The Writing on the Wall.” This show’s peculiar distinction is that it allowed audiences to vote on three different plot conclusions. The two CD editions of the cast recording offer varying material in regard to those choices, and the Varèse reinstates “Ceylon” and the “Moonfall” quartet, which are not on the Polydor disc. But all of the tracks are available in mp3 format. — Matthew Murray