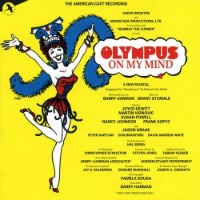 (2 / 5) During the opening number of this musical based on Amphitryon, as the three-man chorus sings “We are the chorus / Please don’t ignore us,” a woman suddenly joins them and adds, “My name’s Delores.” Played by Joyce DeWitt, she is the wife of the show’s principal backer, Murray the Furrier, and she’s here because he has promised her a role. Sweet but untalented, this ex-showgirl pops up throughout the show to help with numbers or exposition, always while modeling Murray’s furs. The joke is funny for a while, less so as Olympus on My Mind wears on. It distracts us from the main plot: the story of Jupiter, who comes to earth to win a beautiful woman by disguising himself as her husband, Amphitryon. In this version, Jupiter isn’t satisfied with bedding her; he wants her to love him. His son, Mercury, warns him that, on Earth, he will start feeling human emotions — and, sure enough, Jupiter begins to experience real pain. But as soon as we start caring about him, Delores is back with her shtick. The main plot, involving disguises and double identities, is reminiscent of The Boys From Syracuse, and much of it is well written and quite funny. The songs, by composer Grant Sturiale and lyricist Barry Harman, are prankish and playful. Among the best of them are “The Gods on Tap,” “Back So Soon,” “Wonderful,” “A Little Something of Yourself,” and “It Was Me!” In a strong cast consisting of performers from two separate Off-Broadway productions, Martin Vidnovic sings well as Jupiter and Amphitryon, Frank Copyk is a funny Sosia, and Jason Graae is a very spruce Mercury. — David Wolf