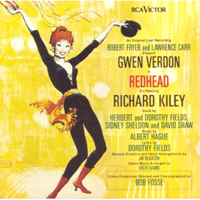 (3 / 5) With a book by Herbert and Dorothy Fields, Sidney Sheldon, and David Shaw, music by Albert Hague, and lyrics by Dorothy Fields, Redhead is certainly among the least-well-known shows to have won the Tony Award for Best Musical, in addition to several other Tonys. RCA’s initial “Living Stereo” release was missing “Essie’s Vision,” an exhilarating dream dance arranged by Roger Adams, but the original recording of that number was added for a later LP release. The CD release includes three new recordings of songs that were cut from the show: “You Love I” (sung by Jennifer Piech and Mark Price), “It Only Takes a Minute” (sung by Liz Callaway), and “What Has She Got?” (sung by Faith Prince). The 18 tracks from the original album may not enable you to follow the show’s intricate murder-mystery plot but, once heard, many of the tunes will likely run through your head for weeks. Gwen Verdon as Essie scores strongly in the effusive waltz “Merely Marvelous” and the tongue-twisting ”’Erbie Fitch’s Twitch.” Richard Kiley vacillates amusingly between “She’s Not Enough Woman for Me” (a comic duet with Leonard Stone) and “My Girl Is Just Enough Woman for Me” (a solo ballad); he also does a great job with “I’m Back in Circulation,” his character’s paean to freedom. Together, Verdon and Kiley shine in the romantic “Look Who’s in Love” and the climactic “I’ll Try.”Further delights include “The Simpson Sisters’ Door,” a sprightly opening chorale; “Behave Yourself,” a funny duet for Essie’s maiden aunts; and “The Pick-Pocket Tango,” with music that conjures images of the choreography that a young Bob Fosse devised for Verdon and Buzz Miller in the role of a jailer. As the song says, “merely marvelous” is how you’re likely to find this recording. — Jeffrey Dunn