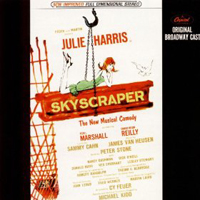 Original Broadway Cast, 1965 (Capitol/DRG) No stars; not recommended. With a book by Peter Stone, this musical is an adaptation of Elmer Rice’s Dream Girl. The show’s leading role was bestowed on a non-singing Broadway star, Julie Harris; she plays Georgina
Allerton, the kooky owner of “The Litterbug” antiques shop, located in a Manhattan brownstone that stands in the way of a new skyscraper. Peter Marshall is the architect who romances her, and Charles Nelson Reilly is Harris’s assistant, who tries to sell her out. The songs, by composer James Van Heusen and lyricist Sammy Cahn, are worse than routine; the lyrics strain for cleverness, and Fred Werner’s metallic orchestrations overemphasize the clunky melodies. Among the oddities are “More Than One Way,” Marshall’s tribute to building ever-bigger skyscrapers; “Just the Crust,” the first of Reilly’s labored comedy numbers; “The Gaiety,” about rude delicatessen waiters; and “Haute Couture,” one of two weird songs sung by Rex Everhart as a construction foreman with his crew as they comment on unisex fashion trends: “You never know just who you may seduce / You think it’s Helen, but it might be Bruce!” Harris, croaking her way through her numbers, is no musical theater dreamgirl. — David Barbour