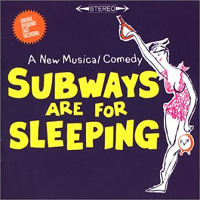 (4 / 5) A legendary title, if for no other reason than David Merrick’s scandalous marketing of the show: He looked in the phone book, found seven people with the same names as the major New York theater critics, and coaxed “rave reviews” from them, which he then had printed in a newspaper ad. This Jule Styne-Betty Comden-Adolph Green show was short-lived onstage, but it made for a cheerful, lively cast album that opens with a spectacular Styne overture, complete with subway effects and big, sassy orchestrations by Phil Lang. From there, it’s one urban delight after another. The score is heavy on comedy songs written with inimitable Comden-Green élan: Featured performer Phyllis Newman won a Tony Award largely on the basis of her hilarious “I Was a Shoo-ln.” Her vis-a-vis, Orson Bean, was nominated largely for his delivery of “I Just Can’t Wait (Till I See You With Clothes On).” You have to endure leading man Sydney Chaplin’s braying in “I’m Just Taking My Time,” but Chaplin nearly redeems himself in “Swing Your Projects,” a commentary on over-leveraged Gotham real estate that’s still topical. As Chaplin’s love interest, Carol Lawrence makes pretty noises in “Girls Like Me” and “I Said It and I’m Glad,” the latter a song with an arresting melody that was dropped during the run. Another appealing number is “Comes Once in a Lifetime.” The original LP album of Subways Are for Sleeping was packaged in a gatefold jacket, but reissues squeezed the notes onto one page. The CD edition offers intriguing bonuses: Comden and Green do a couple of cut songs; demo-album regulars Rose Marie Jun and Jack Haskell are heard from; and Comden’s pensive rendition of “Life’s Not That Simple,” a soulful casualty from Do Re Mi, is a joy. — Marc Miller