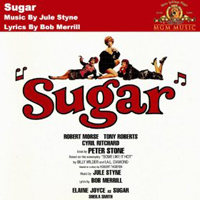 (2 / 5) Sugar was a shocker, the first indication that the great David Merrick production machine of the 1950s-’60s was breaking down. Gower Champion, one of the most dazzling director-choreographers of the period, reconstructed the show on the road pre-Broadway, replacing Johnny Desmond in the role of a singing gangster with hoofer Steve Condos, who was much more menacing because he said nothing but threateningly tap-danced everything. Merrick threw out the entire set and paid for a new one, but still the show wasn’t made into a hit. Even the great, prolific composer Jule Styne was helpless when given lyrics as disgraceful as those provided him by Bob Merrill. Perhaps the musical’s source material, the classic film comedy Some Like It Hot, simply resisted adaptation. Elaine Joyce had the impossible task of following Marilyn Monroe in what was easily her most appealing performance; even so, Joyce comes across as cold and hard on the recording, though she wasn’t given any musical material that might have helped. Cyril Ritchard does nicely with his two numbers, which are among the better items in the score, but Tony Roberts (in the Tony Curtis part) has the dullest of the songs. This show was in Robert Morse’s pocket: As Daphne (the Jack Lemmon role), he kept Sugar running for over a year, giving an old-fashioned clown performance and making the most of every opportunity he was handed. Elliott Lawrence’s musical direction and Philip J. Lang’s orchestrations are so strong and confident that, as you listen, you may think the score is better than it is. {Ed. Note: This album was reissued in a latter-day, remastered CD version by Kritzerland, but it was a limited edition item and is no longer available.]– David Wolf