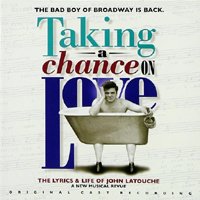 Original Off-Broadway Cast, 2000 (Original Cast) [user=5] This is a gilt-edged tribute to lyricist John Latouche, who wrote in a number of genres and had only occasional good fortune in any of them before dying at age 41. Latouche’s collaborators for musical theater scores were composers Vernon Duke (Cabin in the Sky), Jerome Moross (The Golden Apple), and Leonard Bernstein (Candide); with Douglas Moore, he wrote the opera The Ballad of Baby Doe. “Take Love Easy,” with music by Duke Ellington, is one of Latouche’s best songs that was not part of a show score. Spreading himself around and then dying young worked against Latouche being widely remembered; but this revue, lovingly put together by Erik Haagensen, goes a good distance toward documenting the gifted lyricist’s rightful place in musical theater history. The story of the man’s life, including his extensive homosexual experiences, is told between the songs, 18 of which were unrecorded until this cast album came along. Latouche’s work is sophisticated — for example, he rhymes “Oscar Levant’s room” with “Grant’s Tomb” in a song called “I’ll Take the City” — but can lean toward the rustic when appropriate, as in some songs from Cabin in the Sky. His biggest hit was surely “Taking a Chance on Love,” for which he collaborated with Ted Fetter on the lyrics. But some aficionados will point to “Lazy Afternoon” (from The Golden Apple), presented in the revue as a love song between Latouche and his late-in-life partner, Kenward Elmslie, as the pinnacle of his achievement. The cast, all of them up to all challenges, includes Eddie Korbich, Terry Burrell, Donna English, and Jerry Dixon. — David Finkle