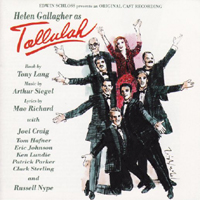 (1 / 5) One of the most colorful personalities in show business history, Tallulah Bankhead was so imitable that any impressionist worth his or her salt could evoke her with one growled “Dahhling!” Small wonder, then, that the musical Tallulah opens with a raft of male Bankheads going through the expected baritone-drawl motions. More surprising is the fact that the ambitious show, which ran briefly Off-Broadway, tried to be a full-scale biography of this magnetic and sometimes outrageous woman. Instead, it comes across as a sort of scrapbook-cum-A&E biography with songs that gaily (ahem!) skim the surface of Bankhead’s life without providing any real insight or substance. Arthur Siegel wrote a hummable score, and Mae Richard’s lyrics are generally serviceable, but the prime asset here is Helen Gallagher in the title role. A true musical comedy pro, she offers a decent imitation of Tallulah while singing far better than the real one ever could. (Oddly enough, Gallagher sings the curtain number, “I’m the Woman You Wanted,” in her own higher voice, not in Bankhead’s way-down tones.) Russell Nype appears to adequate effect as Tallulah’s senator father, and everyone works as hard as possible under the modest circumstances. But as Tallulah herself might have said, “There is less here than meets the eye.” — Richard Barrios