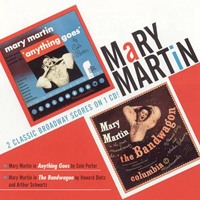 (1 / 5) One of the great 1930s Broadway revues, The Band Wagon (1931) was graced with a terrific Arthur Schwartz-Howard Dietz score, including “Dancing in the Dark” and “I Love Louisa,” and a fine cast. It contained too good a collection of songs to pass away when something as temporal as a revue had closed. There was a mangled, sort-of-musical film version in 1949, titled Dancing in the Dark — and then, of course, the 1953 Fred Astaire-Cyd Charisse classic. (See below.) Coming between them, at the dawn of the LP era, was a recording by Mary Martin. This can in no way be termed a re-creation of the original score; instead, it offers a big star singing the show’s best numbers, packaged with Martin’s recordings of several songs from Cole Porter’s Anything Goes to fill out the album. The star is in great voice, but don’t expect any probing vocal drama here — or, indeed, anything other than perfunctory commitment. This is simply a group of fine songs performed in a resoundingly professional manner but with no theatrical flavor. — Richard Barrios 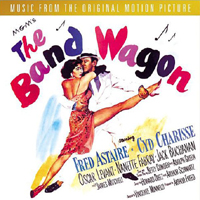 (4 / 5) Fans of this film may not be aware that Fred Astaire starred in The Band Wagon on Broadway in 1931 as well. The movie adds Schwartz-Dietz songs from other shows, and a new gem written for the movie, the evergreen showbiz hymn “That’s Entertainment!” The plot has little or nothing to do with The Band Wagon as it existed on stage, but Astaire is in fine company here: Jack Buchanan, Oscar Levant, and the effervescent Nanette Fabray in her only good film role. Cyd Charisse, one of Astaire’s finest dance partners, is dubbed by India Adams — a good singer, but this is not the best of such match-ups. Two outtake recordings of songs cut from the film are special treats: Fabray’s “Got a Bran’ New Suit,” originally from the Schwartz & Dietz revue At Home Abroad, and Adams’ rendition of “Two-Faced Woman.” (The latter recording was later used in the film Torch Song, with Joan Crawford — in blackface! — lip-synching to Adams’ vocal.) Although this soundtrack CD is obviously not a memento of the show as performed on Broadway, it’s crammed with musical pleasures.  — R.B.