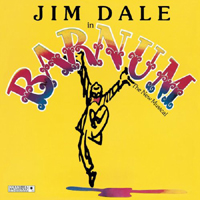 (2 / 5)  This Jim Dale vehicle has a book by Mark Bramble, music by Cy Coleman, and lyrics by Michael Stewart. A fictionalized biography of the showman P.T. Barnum, it’s really a series of production numbers looking for a musical. There is a sort-of plot about Barnum’s up-and-down marriage to the disapproving Charity (a young, chipper Glenn Close), but the real drawing cards were Joe Layton’s inventive staging, Dale’s inexhaustible energy, and the manically cheerful score. Coleman and Stewart’s work is thoroughly professional, especially the witty “There Is a Sucker Born Every Minute” and the catchy “Thank God I’m Old” (sung by Terri White as one of Barnum’s attractions, allegedly the oldest woman in the world). And just try to get the Act II opening march “Come Follow the Band” out of your head. But the score could use a dose of Ritalin; even the ballads are extroverted, and Hershy Kay’s orchestrations add to the forced cheerfulness. — David Barbour 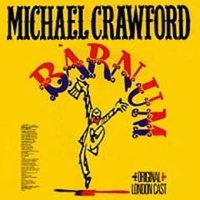 (2 / 5) Michael Crawford had one of his biggest pre-Phantom triumphs in the title role, but this recording of the London Barnum pales next to the Broadway original. Crawford’s performance was touted as having topped Jim Dale’s in terms of physical stunts — a video of this production was made, and is still available commercially — but on the cast album, his more relaxed interpretation lacks pizzazz. If he generally sings better than Dale, the energy of the role’s creator is much missed. Deborah Grant’s Charity is a colorless and vocally uninteresting presence; even Glenn Close naysayers are likely to prefer Close’s singing. The best work here comes from Jennie McGustle, whose zesty rendition of “Thank God I’m Old” is almost worthy of Terri White. As Jenny Lind, Sarah Payne sports an accent as thick as a slice of sacher torte, turning the first-act ballad “Love Makes Fools of Us All” into a mush of vowel sounds. Also missing are the brief musical “chases” between various sections of the show. There are hints of a different approach in a revised opening, which begins with a rather ghostly pipe organ, and a slightly different song order that places Tom Thumb’s solo, “Bigger Isn’t Better,” in the second act. The orchestrations sound altered a bit, with a country fiddle appearing prominently in “Museum Song” and “I Like Your Style.” But overall, next to the original, this disc is so much humbug. — D.B.