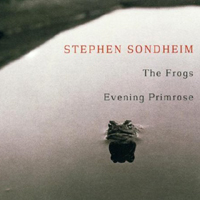 (5 / 5) Based on a play by Aristophanes, The Frogs was written by Stephen Sondheim and Burt Shevelove to be performed by the Yale Repertory Theatre in the university’s swimming pool. It had a one-week run with an ensemble that included three Yale School of Drama students who would be heard from again: Meryl Streep, Sigourney Weaver, and Christopher Durang. The show harkens back to the Sondheim-Shevelove-Larry Gelbart musical A Funny Thing Happened on the Way to the Forum in that both were freely based on ancient comic classics. This excellent recording of the brief score of The Frogs benefits from the luxury casting of Nathan Lane as the god Dionysos (“an aging juvenile of great charm”) and Brian Stokes Mitchell as his slave, Xanthias. The comic chemistry between these two is terrific, never more so than in the droll “Prologos: Invocation and Instructions to the Audience.” “Please don’t cough / It tends to throw the actors off,” Dionysos begs of the assembled theatergoers, going on to make further requests: “Please refrain / From candy wrapped in cellophane,” and “Please, don’t fart — there’s very little air and this is art.” In the equally funny title song, the chorus alternates between froggy noises and witty self-assessment (“Frogs! / We’re the frogs / The adorable frogs! / Not your hoity-toity intellectuals / Not your hippy-dippy homosexuals”). The only unconvincing moment of this world-premiere recording of the score comes when Shakespeare shows up in the person of Davis Gaines to sing the beautiful ballad “Fear No More” (with a text by the Bard himself, from Cymbeline). Gaines has displayed a powerful baritone in myriad musical theater roles over many years, but here he sounds tired and affected.

The second part of this disc is devoted to songs from Evening Primrose, an hour-long musical that aired on ABC-TV in 1966. The teleplay by James Goldman concerns a struggling poet who remains in a Manhattan department store after closing time and there discovers — in the words of Frank Rich, who wrote notes for the Nonesuch recording — “a mysterious nocturnal society of eccentric shut-ins as well as the muse he’s been searching for, a sort of modern Rapunzel named Ella.” In the telecast, Charles was played by Anthony Perkins, Ella by Charmian Carr. Since it was never a stage musical and is unlikely ever to be one, Evening Primrose doesn’t warrant a lengthy review here, but it must be said that the four-song score contains two of the best ballads Sondheim ever wrote: Ella’s touching reminiscence “I Remember,” and the gorgeous duet “Take Me to the World.” For this recording, Charles and Ella are sung persuasively by Neil Patrick Harris and Theresa McCarthy. Both the Evening Primrose and Frogs tracks feature the American Theatre Orchestra, brilliantly conducted by Sondheim specialist Paul Gemignani. The CD boasts Nonesuch’s typically stunning recorded sound — powerful but not harsh, ambient but not overly reverberant, with great dynamic range.  — Michael Portantiere