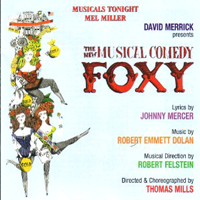 (2 / 5) Here was a wonderful idea for a musical: Bert Lahr in an adaptation of Volpone, with the action of that Ben Jonson classic moved to gold-rush Alaska. But the project was seemingly cursed from its inception. The creators of Foxy included the great lyricist Johnny Mercer; the wrong director, Robert Lewis; a constantly changing line-up of ineffective producers; and an inexperienced pair of book writers, Ring Lardner, Jr. and Ian McLellan Hunter, who refused to listen to Bert Lahr or pay attention to Jerome Robbins when he came in to help. The 1964 result was a ramshackle construction in which about half the score consisted of undramatic, shockingly trite numbers. But even when the ideas for the songs were poor, Mercer had great fun playing with words; and when the ideas were good, as in “Respectability,” “Many Ways to Skin a Cat,” “Money Isn’t Everything,” and “Bon Vivant,” he and composer Robert Emmett Dolan hit them out of the park. (“Bon Vivant” is a highlight, as the chorus serenades a fake English Lord with “Yoicks and zounds / And Elizabethan sounds / What a bon vivant is he!”) Unfortunately, this recording of the Musicals Tonight! staged concert presentation of the show falls short. John Flynn is much too sweet as the scheming Doc; Rudy Roberson, given the impossible task of following Bert Lahr, seems to have no comic chops at all; and the single-piano accompaniment is dull. (Note: Bruce Yeko’s private label S.P.M. released on LP a live recording of a performance by the Broadway cast, but it has sound problems. Box Office Records issued both an album titled Bert Lahr on Stage, Screen and Radio, which includes two very good, live Foxy tracks, and Johnny Mercer Sings, featuring a delightful 10-song demo of the score.)  — David Wolf