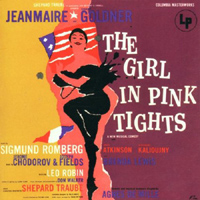 (4 / 5) Sigmund Romberg worked as a staff writer for the Shuberts, churning out 22 scores from 1914 through 1918 alone! Following his indentured servitude, he went on to compose such smash hits as Blossom Time, The Student Prince, and The Desert Song. In the 1940s, when his form of operetta had become passé, he changed gears and surprised everyone with a beautiful score (with lyrics by Dorothy Fields) for Up in Central Park. His next musical was a flop, but then a new Romberg score hit Broadway when The Girl in Pink Tights opened in 1954. The show ran only 115 performances, but what astounded theatergoers was that the composer had died in 1951. With jottings of an unfinished Romberg score having been found after his death, producer Anthony Brady Farrell had hired orchestrator Don Walker to complete the music. Walker admitted that there might have been more Walker than Romberg in the finished product, but the score is a delight. The show is a fictionalized look at the creation of the 19th-century melodrama spectacle The Black Crook. The comic numbers are its standouts, thanks to lyricist Leo Robin (best known for Gentlemen Prefer Blondes). Robin skewered the acting profession in such hilarious songs as “We’re All in the Same Boat” and “You’ve Got to Be a Little Crazy.” The hit song was “Lost in Loveliness,” but equally fine are the ballads “In Paris and in Love” and “My Heart Won’t Say Goodbye.” Charles Goldner, Brenda Lewis, Jeanmaire, and David Atkinson shine in their numbers; deep down in the cast list you’ll find Marni Nixon, Ted Thurston, Joshua Shelley, Dania Krupska, and Gregory and Maurice Hines. The Girl in Pink Tights is highly enjoyable for its beautiful Romberg melodies and witty, sophisticated Robin lyrics. The cast album’s riches are all the more exciting as the final work of a great composer.  — Ken Bloom