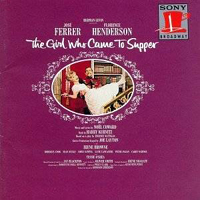 (3 / 5) This Cinderella story is set during the coronation of George V, adapted by Harry Kurnitz (book) and Noël Coward (music and lyrics) from Terence Rattigan’s The Sleeping Prince. As the libidinous Prince Regent of Carpathia, José Ferrer is a gloomy presence on the cast album, with his post-nasal-drip baritone and his singular lack of charm. As the American chorus girl in London who attracts his royal eye, Florence Henderson hits all the notes and has one wonderful showpiece, “The Coconut Girl,” in which she performs an entire, ridiculous, period musical comedy in under eight minutes. But Henderson is a bit too on-the-nose, capable without idiosyncrasy. So this unlikely couple’s doomed affair doesn’t resonate as it should. However, the score itself is woefully underrated. Sir Noël contributed a cart full of appealing ballads, elegant waltzes, and satirical numbers, the latter exhibiting his customary lyrical sangfroid. He even whipped up an 11-minute music-hall sequence for Tessie O’Shea, utterly irrelevant to the action but so fetching that O’Shea collected a Tony Award for her performance. Listen carefully to Sony’s CD, which rearranges the tracks from the LP into their proper stage order, and you’ll hear a big, old-fashioned show crashing as it docks in Manhattan. But if you step back just a bit, it emerges as a warm, witty musical with, unfortunately, two romantic leads who were not made for each other. (Note: Coward may be heard singing the show’s songs himself, including several cut numbers, on the DRG disc Noël Coward Sings His Score for The Girl Who Came to Supper. If anything, he makes a better case for the property than does the cast album.) — Marc Miller