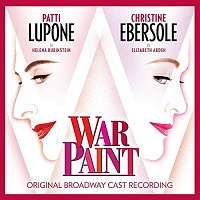 (2 / 5) Based on the real-life rivalry between cosmetics titans Helena Rubinstein and Elizabeth Arden, with a score by Grey Gardens team Michael Korie and Scott Frankel, War Paint had the potential to be a great musical. Or, at least, with Broadway titans Patti LuPone and Christine Ebersole inhabiting the lead roles, it could have been a highly entertaining one. So it’s unfortunate that the final product played so tepidly on stage. While LuPone (Rubinstein) and Ebersole (Arden) were each in top form, the show never had its leading ladies share a scene together until the very end; instead, they would sing about each other rather than to each other from opposite sides of the stage. This robbed the show of any tension or drama, and it became a “she said/she said” play-by-play of the two women’s lives. On this recording, War Paint fares slightly better, with the stars giving commanding vocal performances, but the album also reinforces that the score is not on par with Grey Gardens. Though Frankel’s jazzy compositions are inventive and tuneful in period-appropriate orchestrations by Bruce Coughlin, several of the songs lack structure and/or don’t build to a satisfying musical conclusion. Korie’s lyrics, meanwhile, are lacking in subtlety or any deep insight regarding the principal characters, making such songs as “If I’d Been a Man” and “My Secret Weapon” much less effective than they might have been. Still, there are two strong 11 o’clock numbers in “Forever Beautiful” (Rubinstein) and “Pink” (Arden), each a reflection on the women’s legacies, which are now being taken away from them in the concluding years of their lives. When the two do get to sing together, as they do in “Face to Face” and “Beauty in the World,” LuPone and Ebersole’s voices blend in a surprisingly effective cohesion that briefly brings the score to a more musically dramatic plain. Douglas Sills and John Dossett also appear as the two men behind the women, but their talents are wasted on the two worst songs in the score, “Step on Out” and “Dinosaurs.” In War Paint, it’s clear that LuPone and Ebersole are meant to be the ones who rule — and they do. But with stronger material, they could’ve really shone. — Matt Koplik