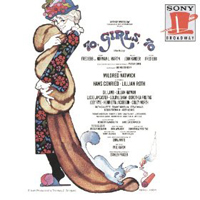 (3 / 5)  This show flopped on Broadway, but the cast recording is too much fun to pass up. Scored by composer John Kander and lyricist Fred Ebb, 70, Girls, 70 has a book by Ebb and Norman L. Martin (with an adaptation credit for Joe Masteroff), based on the English play Breath of Spring. The characters are residents of a Manhattan hotel for the aged who turn to grand larceny to spice up their lives. Perhaps what doomed the musical was the overly complicated show-within-a-show concept, in which the veteran performers frequently step out of the action to perform numbers about the vicissitudes of old age. These songs — including “Old Folks,” “Broadway, My Street,” and “Coffee in a Cardboard Cup” — are the most enjoyable in the score, especially as delivered by this ball-of-fire cast. The title tune, with its rousing banjo passages, is a gem. Less interesting are “The Caper,” which lays out the plan for the first robbery, and “The Elephant Song,” an overlong 11-o’clock number in which leading lady Ida (Mildred Narwick) announces her own imminent death. However, Natwick, is delightful throughout — especially in “Home,” an inviting rhumba, and “Yes,” a lively tune that sums up the songwriters’ live-for-today philosophy. Equally peppy are Hans Conreid, Lillian Roth, and Lillian Hayman. A standout number is “Go Visit (Your Grandmother),” featuring Yiddish-theater veteran Henrietta Jacobson with Tommy Breslin; the song includes some eyebrow-raising lyrics (“Go ahead and give the old lady a laugh / You went to Fire Island last summer? / For God’s sake, show her the photographs!”). Don Walker’s orchestrations make extensive use of onstage pianist Dorothea Freitag and provide a propulsive undertow for every number.  — David Barbour 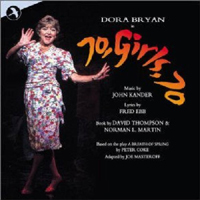 (3 / 5) This is an appealing alternative to the Broadway album. The London production of 70, Girls, 70 starred Dora Bryan and featured a new book by David Thompson and Norman L. Martin that eliminated some of the lesser numbers while adding two pleasant, new ones: “Well Laid Plans” and “I Can’t Do That Anymore.” Julian Kelly’s new, more intimate orchestrations work nicely. The recording offers lively renditions of the score’s highlights, sparked by Bryan’s warbly but witty singing. — D.B.