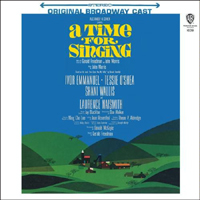 (3 / 5) Based on Richard Llewellyn’s popular book How Green Was My Valley, which inspired the acclaimed 1941 movie of the same title, A Time for Singing deals with the grim lives of Welsh coal miners. The John Morris-Gerald Freedman score surely sings out their tale, right from the a cappella opening to the tragic finale. The choral work is ample and terrific throughout, and leading man Ivor Emmanuel’s Welsh baritone is overpowering. Morris’s harmonies are not standard-issue Broadway; they’re wrapped up in evocative Don Walker orchestrations, and several ballads (“That’s What Young Ladies Do,” “There Is Beautiful You Are,” “Let Me Love You”) deserve rediscovery. What seems to have killed the show more than anything else is the casting. Shani Wallis is a simpering leading lady, while Tessie O’Shea and Laurence Naismith are far too old to be convincing as the parents of eight-year-old Huw (Frank Griso, an irritating child actor). Elizabeth Hubbard and an up-and-coming George Hearn are wasted in supporting roles. Also, the score goes conventional just when it needs to offer something special, as in Wallis’s “When He Looks at Me” or the wimpy title tune. Still, this deeply felt neo-operetta doesn’t deserve the obscurity it has suffered for decades, and its great ensemble work is all over the cast album.  — Marc Miller