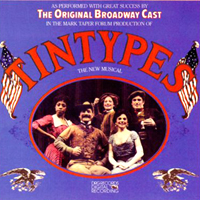 (3 / 5) Allegedly, this was the first-ever digitally recorded cast album. A cavalcade of early-20th-century Americana, Tintypes sounds splendid here as its five-member cast and small band run through several dozen period songs — some classic, some virtually forgotten — in witty arrangements by Mel Marvin. Unlike so many other revues, the show has a real arc, and the songs comment wonderfully on themselves; for instance, “Toyland” becomes an anthem about America’s lost innocence, and “I Want What I Want When I Want It” is sung by a bellicose Teddy Roosevelt. Hearing “The Stars and Stripes Forever” or “Meet Me in St. Louis” for the zillionth time isn’t so thrilling, but trivialities like “Electricity” and “Teddy Da Roose” are well worth a listen, especially as rendered by this talented quintet: The fine character actor Trey Wilson and the elegant soprano Carolyn Mignini play the elites; the funny Mary Catherine Wright and the pre-directorial Jerry Zaks embody the downtrodden immigrant masses; and Lynne Thigpen is a marvel in everything she does. As Anna Held’s maid (it’s complicated, but the well-edited album supplies a context), Thigpen slowly builds the old Bert Williams favorite “Nobody” to a shattering finish. Wisely, this was the Act I finale; nobody in his or her right mind would have followed it. — Marc Miller