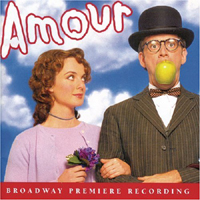 (4 / 5) The English version of Michel Legrand’s French smash hit Le passe-muraille, based on Marcel Ayme’s short story about a man who gains the ability to walk through walls, lasted all of 17 performances on Broadway, but the cast recording proves that the length of a show’s run is not necessarily a good indication of its quality. Legrand’s songs — nearly 30 of them — linger in the ear and heart, revealing his gift for bouncy melody, his talent for setting soaring emotions to music, and his fine sense of humor. The lyrics, adapted by Jeremy Sams from Didier van Cauwelaerr’s French originals, are not quite the equal of the music but do have their share of clever rhymes and evocative imagery. All of this is put over by a top-notch cast led by Malcolm Gets and the incandescent Melissa Errico, with her shimmering soprano. The supporting performers — Lewis Cleale, John Cunningham, Christopher Fitzgerald, Norm Lewis, Sarah Litzsinger, Nora Mae Lyng, and Bill Nolte — are dynamic in voice and character, the epitome of a tight Broadway ensemble. Their work and that of musicai director Todd Ellison, together with Legrand’s modest yet ideal orchestrations, keep the energy level high and the atmosphere magical from beginning to end. Clocking in at about an hour and 15 minutes, the recording omits some musical material but includes a bonus track of Legrand accompanying himself as he sings one of the show’s songs. Even on audio disc, Amour is an enchanting, romantic fairy tale for adults.  — Matthew Murray