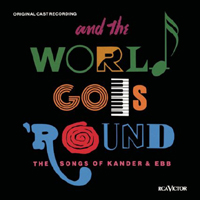 (4 / 5) The songs of John Kander and Fred Ebb, never lacking in entertainment value or theatricality, were a natural for the revue showcaseformat. This is a sparkling recording of a show for which the creative team — director Scott Ellis, choreographer Susan Stroman, “conceiver” David Thompson, and musical director and arranger David Loud — mined nearly every possibility from the team’s catalog. There are traditional renditions of familiar material (“My Coloring Book”), radical new interpretations of standards (the theme from New York, New York is sung in multiple languages as an international tribute to The City That Doesn’t Sleep), and interesting combinations of unrelated numbers (“I Don’t Remember You,” from The Happy Time, and “Sometimes a Day Goes By,” from Woman of the Year). Only a few of the album’s 18 tracks fall flat, most notably an arrangement of the title song from Cabaret, which has some almost scatted lyrics and a synthetic smoothness that make it sound like a parody of a modern-day cabaret standard. It’s no surprise that almost all of the powerhouse performers (Robert Cuccioli, Karen Mason, Brenda Pressley, Jim Walton, and Karen Ziemba) and the creative team went on to bigger things in bigger shows; the musical, dramatic, and comedic colors they find in this material help Kander and Ebb’s songs seem as vibrant and relevant as ever. — Matthew Murray