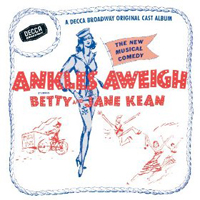 Original Broadway Cast, 1955 (Decca) 0 Stars; not recommended.This is a four-alarm disgrace, even worse than its title implies. A tip-off is the description of the Guy Bolton-Eddie Davis libretto and the Sammy Fain-Dan Shapiro score on the back cover: “Things happen so fast in Ankles Aweigh — plot, music, and lyrics are so rapidly paced and so tightly integrated — that a synopsis is difficult.” As for score: it’s dull for the first four cuts, then turns really bad with “Headin’ for the Bottom Blues” and “Here’s to Dear Old Us.” If you can make it past these losers, you’ll groan through “La Festa,” a terrible tarantella, followed by the pseudo-exciting casino number “Ready Cash.” Then comes “Nothing Can Replace a Man,” which insists that “Throughout the world of science, no one’s found a new appliance that ever can replace a man.” (Oh, really? Check out any “adult entertainment” store.) “Honeymoon” is possibly the first show tune to encourage premarital sex, but that’s not to say that this musical was ahead of its time. It was way behind it. — Peter Filichia