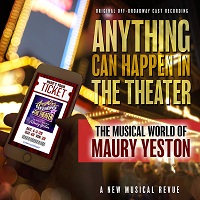 (4 / 5) Maury Yeston is one of the finest and most versatile musical theater composer-lyricists of his era, so it’s good to have this cast album of a very enjoyable and well-crafted revue of his work that was presented Off-Broadway by the York Theatre Company in 2019, directed by Gerard Alessandrini of Forbidden Broadway fame. The program includes songs from Yeston’s most famous shows, with one major exception (see below), along with a healthy sampling of  less-well-known material. From Nine, we have the bravura number “Guido’s Song” and the lyrical “Only With You,” both rendered with lovely tenor tone by Benjamin Eakeley, as well as the gorgeous “Unusual Way” and the wittily seductive “A Call From the Vatican,” two fine showcases for the talents of Mamie Parris. Also to be found here is “Cinema Italiano,” written by Yeston expressly for the film version of Nine, performed with verve by Parris, Justin Keyes, and Jovan E’Sean. Two selections from Grand Hotel, for which Yeston contributed much but not all of the score (to augment songs previously written by Wright and Forrest for an earlier incarnation of the show), are the passionate  “Love Can’t Happen” (Eakeley) and the delightful “I Want to Go to Hollywood” (Parris).  Yeston’s Phantom, a lesser-known alternative to Andrew Lloyd Webber’s adaptation of the same source material, is represented by “Home,” sung by the full company. “New Words,” from a Biblical musical titled In the Beginning , is a touching song, movingly performed here by Eakeley, about a parent teaching language to a young child; the writing is marred only by a surprising error in the lyrics. (Mars is a planet, Mr Y., not a star!) This recording also embraces several stand-alone songs, i.e., not from the scores of musicals. Two of the best of these are “Danglin’,” a soulful torcher eased on down by Alex Getlin, and the specially written title tune of the revue, delivered by all as the opening number. An exceptionally noteworthy item is the sexy/funny “Salt n Pepper,” originally written for the unproduced musical The Queen of Basin Street, here given a spicy turn by E’Sean. Not sampled is the score of one of Yeston’s biggest hits, Titanic; although an exquisitely harmonized arrangement of that title song was featured as an encore in the York production, it’s not on the album, for some reason. Conversely, one thing the recording boasts that the show itself did not are Doug Besterman’s excellent orchestrations for eight musicians variously playing a total of about 20 instruments. Greg Jarrett is the top-notch musical director — Michael Portantiere