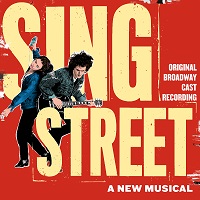 (4 / 5) First, a few words of explanation: The show that yielded this cast album opened Off-Broadway at the New York Theatre Workshop in December 2019.  It was announced for a Broadway transfer even before the NYTW run ended — but then the COVID-19 crisis that began in the spring of 2020 scuttled those plans, indefinitely closing all theaters in New York City (and pretty much throughout the world). So even though this album literally has “Broadway” written all over it, we have no way of knowing at this writing if Sing Street will ever make it to The Street. At any rate, the show has a wonderfully infectious score, here preserved as one of the most compulsively listenable cast recordings in recent memory; and since all of the performers heard on the album were officially cast in the Broadway transfer of the show, the “Original Broadway Cast” designation is arguably not inaccurate. Based on a 2016 coming-of-age film set in Dublin in 1982, the musical features a generous handful of terrific songs that were originally written by Gary Clark and John Carney for that sweet indie flick, plus some new material. The opening track, “Just Can’t Get Enough,” gives us a happy hint that we’re going to be hearing lots of catchy up-tunes crafted in ’80s-rock style, with irresistible hooks. That certainly turns out to be true, as with such other cuts as “Drive It Like You Stole It,” “Brown Shoes,”  “A Beautiful Sea,” and “Girls,” but there are also some lovely ballads (“Dream for You,” “Go Now”). Brenock O’Connor, in the central role of schoolboy/aspiring rock star Conor Lawlor, does a fine, authentic-sounding job with much of the solo singing on the album, and there are also worthy contributions from Zara Devlin as Raphina, a young model on whom Conor develops a major crush; Martin Moran as the authoritarian Brother Baxter; and Gus Halper as Conor’s troubled brother, Brendan (he does a beautiful job with “Go Now”). One of the best songs in the score, “Up,” is heard in two different versions — ballad and up-tempo, both highly enjoyable. At the end of the show, Conor leaves his family and his band to go with Raphina off to London, where they will seek their fortunes. Here’s hoping that the future will be bright for them and for this charming, affecting, lovable little musical.  — M.P.