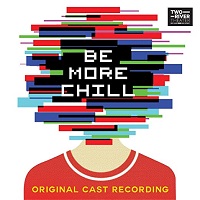 (4 / 5)  Based on a novel by Ned Vizzini, Be More Chill is a cautionary tale about a loner teenager named Jeremy Heere who attempts to become “chill” by ingesting something called a “squip” (super quantum unit Intel processor), which winds up controlling his thoughts and actions. The show premiered at the Two River Theater in Red Bank, New Jersey for a one-month limited run in 2015.  That production received mixed reviews, but this cast recording gained huge popularity via internet streaming and downloads, eventually sparking the Off-Broadway production of 2018 and the subsequent Broadway transfer (see below). Even if it’s hard to explain exactly how the score “went viral,” it’s easy to understand why it did: Composer-lyricist Joe Iconis has a firm grounding in the classic musical theater canon, and a great talent for being able to wed traditional song structures and other methods of craft with an up-to-the-minute sound and sensibility. Listen to the opener, “More Than Survive,” a spot-on, character-establishing, “I want” song for Jeremy that begins as follows: “C-c-c-come on, c-c-c- come on! Go, go! I’m waiting for my porn to download.” (The album has an “explicit lyrics” label.) Or sample “The Smartphone Hour (Rich Set a Fire),” a super-clever takeoff on “The Telephone Hour” from Bye Bye Birdie. Also quite amusing is Iconis’s depiction of present-day high school theater subculture, as in “I Love Play Rehearsal.” The pretty much ideal cast heard here is led by Will Connolly as a charmingly nerdy Jeremy, with Eric William Morris as The Squip; George Salazar as Jeremy’s staunch friend, Michael; Stephanie Hsu as Christine, the girl with whom Jeremy’s obsessed; and Gerard Canonico in a ball-of-fire performance as Rich, the ill-fated guy who turns Jeremy on to The Squip. Salazar does a tour-de-force job with arguably the best song in the score, the one that became the biggest viral phenomenon of all: “Michael in the Bathroom,” an affecting anthem of teen angst. — Michael Portantiere 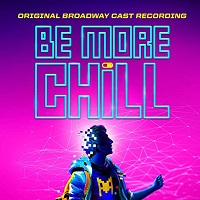 (4 / 5) Buoyed by the extraordinary online popularity of its score, as described above, Be More Chill was presented Off-Broadway at the Irene Diamond Stage at the Pershing Square Signature Center in the summer of 2018, with plans for a move to Broadway already largely in place at that time. This production featured several cast members from the Two River Theater production mentioned above, including Hsu, Salazar, and Canonico reprising the roles they originated. New cast members included Will Roland as Jeremy, Jason Tam as the Squip, Tiffany Mann as Jenna, Britton Smith as Jake, and Jason “Sweettooth” Williams as Mr. Heere, but not all of these changes were improvements; for example, Roland’s performance doesn’t have quite the likeability of Connolly’s. On the plus side, Tam makes the role of The Squip very much his own with his strong, distinctive voice and his very funy Keanu Reeves imitation. As heard here, the score is well performed, with some relatively minor rewrites and additions in material. (This album is longer than the original, 24 tracks as compared to 21.) Both the off-Broadway and Broadway productions of Be More Chill were marred by painfully loud sound amplification, which may have been partly responsible for the brevity of the 2019 Broadway run (only 177 performances) of a show that many had expected to be a big hit, so the fact that listeners to the cast album are in full control of the volume is a huge plus for the experience. Music and lyrics this good don’t need to be blasted at an audience; on the contrary, any score suffers greatly rather than benefits from such treatment, a lesson that Iconis and his colleagues will hopefully learn for future productions of his shows. — M.P.