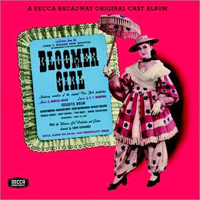 (3 / 5) While the show threw off no enduring hit songs, and is seldom revived, the cast album of this Harold Arlen-E.Y. Harburg wartime hit has rarely been out of print. Inspired by the life of feminist/industrialist Dolly Bloomer  — although the bloomer girl of the title is her fictional niece, Evelina — and set during the Civil War, its score has long melodic lines and blues-tinged harmonies, subtle satire, and loads of Harburgian wordplay. As he often did, the master lyricist pokes fun at the battle of the sexes, skewers moral hypocrisy (Evelina lives in a community so staid that “Even the rabbits / Inhibit their habits”), and argues stirringly for the cause of freedom in the stunning song “The Eagle and Me.” (It’s one of the 50 songs that Stephen Sondheim has stated he wishes he’d written, and you’ll understand why.) Bloomer Girl was one of the first of the post-Oklahoma! Americana musicals, and it borrowed that show’s personnel liberally — not just choreographer Agnes De Mille, but also soubrettes Joan McCracken and Celeste Holm, the latter promoted to leading lady. Truth to tell, Holm is vocally underpowered for Evelina, falling back on scoops, head voice, and other tricks to make it through such rangy Arlen melodies as “Right as the Rain.” McCracken is even worse, so overplaying her comedy songs that she nearly spoils such choice couplets as “Utopia, Utopia / Don’t be a dope, ya dope, ya!” The men aren’t vocal godsends, either: David Brooks’ “Evelina” and Dooley Wilson’s “The Eagle and Me” lack flavor. The most powerful singer on the album is probably Arlen himself, making an impressive cameo appearance in “Man for Sale.” As to the album’s various issues and reissues, the Decca CD is the keeper; a simulated stereo LP edition made everyone sound like they were singing at the bottom of a well. This version is sonically improved and has some dandy extras, such as a longer, funnier version of “Sunday in Cicero Falls” and an alternate take of “I Got a Song.” — Marc Miller