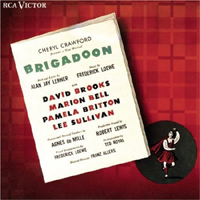 (5 / 5) This is one of the most exciting cast albums of the pre-LP era. It was RCA’s first stab at Broadway, and although the mono sound is antique by today’s standards, it’s crisp for its day. The orchestra seems augmented for the recording, and Franz Allers’ conducting is rousing. David Brooks plays Tommy, a world-weary romantic who, with his cynical friend Jeff, stumbles upon a Scottish village that comes to life for only one day every 100 years. Tommy falls in love with the lass Fiona, played by Marion Bell. The two leads combine legitimate vocal training and a full-bodied Broadway sound with believable acting and unaffected diction, soaring through such magnificent Alan Jay Lerner-Frederick Loewe songs as “The Heather on the Hill” and “Almost Like Being in Love.” Lee Sullivan as Charlie Dalrymple delivers impeccable renditions of ”I’ll Go Home With Bonnie Jean” and the wistful ballad “Come to Me, Bend to Me.” Since these recordings were originally released as a 78-rpm set, the score is truncated, but the cuts were made so carefully that the album doesn’t sound incomplete — except for the excision of the character Meg Brockie’s wonderfully witty Act I number “The Love of My Life.” What we have here is a vibrant reading of highlights of a great score that has all the freshness of a new Broadway smash by two songwriters who went on to more than fulfill their promise. — Gerard Alessandrini 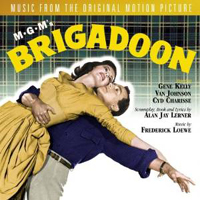 (2 / 5) MGM’s screen version of Brigadoon was misguided in many ways. Lerner and Loewe’s great score is not well served here. The orchestrations sound transparent and timid, and the casting of Gene Kelly and Cyd Charisse in what were rich singing roles in the Broadway show transformed them into dancing roles, causing some beautiful ballads to be discarded. Also cut were both of Meg Brockie’s songs, because they were considered too risqué for 1954 movie audiences. However, some of what remains is robustly performed. The dance music will entertain those who love “The MGM Musical Sound,” and if you’re a big Gene Kelly fan, you may enjoy Rhino’s expanded CD, which includes Kelly’s renditions of the cut songs “There But for You Go I” and “From This Day On.” Also included is another number that was excised from the film, “Come to Me, Bend to Me,” sweetly sung by John Gustafsen, who dubbed for Jimmie Thompson.  But this isn’t Brigadoon as we all know and love it. — G.A. 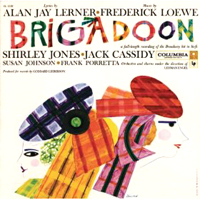 (4 / 5) Here is one of the best studio cast albums of the 1950s, conducted by the great Lehman Engel. The orchestral and choral work is excellent, and the cast is strong  — especially the female leads. Shirley Jones is the embodiment of Fiona, but the most thrilling bit of casting is Susan Johnson as Meg; both of that colorful character’s  great comic songs, “The Love of My Life” and “My Mother’s Weddin’ Day,” are here in their raunchy entirety, and Johnson’s delivery of Lerner’s witty lyrics is brassy and brilliant. As for the men, Jack Cassidy brings star power to the role of Tommy, but some listeners may feel that he doesn’t have quite the right sort of legit Broadway voice for these songs; and Frank Poretta as Charlie, although a fine tenor, arguably sounds too mature for this boyish part. — G.A. 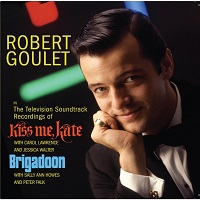 (2 / 5) This recording contains only nine songs from the Brigadoon score, eliminating both of Meg Brockie’s songs as well as the opening chorus (“Once in the Highlands”), “Jeannie’s Packin’ Up,” “The Chase” sequence, the Wedding Dance, and the Sword Dance. The songs that were retained are presented on this album in some weird, random order, rather than as they appeared in the Broadway show and in the actual 1966 TV broadcast. Most of the keys have been significantly lowered from the originals, and the arrangements and orchestrations sound much more “pop” than “musical theater.” All of that makes this come across as more of an enjoyable, mid-’60s pop album of songs from Brigadoon than a cast recording, but the presence of Robert Goulet and Sally Ann Howes in the roles of Tommy and Fiona does give it some theater cred. Both sound glorious here, even in the lower keys, and someone named Tommy Carlisle does a lovely job with Charlie Dalrymple’s “I’ll Go Home With Bonnie Jean” and “Come to Me, Bend to Me.” Marlyn Mason delivers Meg Brockie’s few sung lines in “McConnachy Square” with enough charisma that it’s a shame she wasn’t given a shot at “The Love of My Life” and “My Mother’s Weddin’ Day.”  [Note: This recording as originally released on LP had such a brief running time that it was later combined with the cast album of the 1968 TV version of Kiss Me, Kate, in which Goulet also starred, for Sony’s single-disc CD release.] — Michael Portantiere 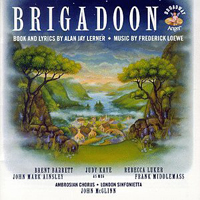 (4 / 5) If you’re looking for a complete recording of Brigadoon in modern digital sound, here it is. The London Sinfonietta lovingly performs every bar of the score, and the cast is top-notch. Conductor John McGlinn presents the songs in a most lyrical, lush setting, achieving the perfection of a fine classical music recording. As Tommy, Brent Barrett sounds gorgeous. Rebecca Luker is just as well cast; she glides through Fiona’s numbers blissfully, her standout performance being “Waitin’ for My Dearie.” John Mark Ainsley is first-rate as Charlie in “I’ll Go Home With Bonnie Jean” and “Come to Me, Bend to Me,” and Judy Kaye is a terrific Meg, giving her character’s comic turns just the right amount of sass. Most of the ensemble work is excellent, although some of the chorus members sound a bit too operatic in their solo lines, and McGlinn’s conducting is impeccable.  — G.A. 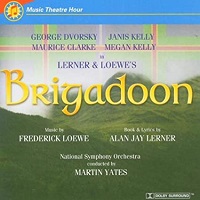 (3 / 5) While most if not all of the JAY company’s studio recordings of classic musicals are note-complete presentations of the respective scores, this album is a more traditional compilation of the songs, for the most part eschewing the show’s dance music, scene transitions, etc. — although the extended dance section of “I’ll Go Home With Bonnie Jean” and the entr’acte are both included. Interestingly, this recording employs the character surnames that were swapped in for the original London production of Brigadoon in order to comport with authentic Scottish clan names. (Apparently, Alan Jay Lerner had failed to do his research in this regard, just as he had not bothered to study British speech well enough to avoid using some American English phrases in his lyrics for My Fair Lady.) Thus, the MacLarens are here the MacKeiths, Charlie Dalrymple is Charlie Cameron, and so on. But since the only surnames sung in the lyrics are “Harry Beaton” (now “Harry Ritchie”) and the list of names in “My Mother’s Wedding Day,” this change is mostly evident from reading the cast of characters list in the notes for the album. Yet another anomaly: While George Dvorsky sings the leading male role of Tommy Albright on the edition of the recording that was distributed in the U.S., Ethan Freeman is heard on the version that was issued in the U.K. and elsewhere in Europe. Dvorsky does a lovely job with Tommy’s songs in the excellent, authentically Scottish company of Janis Kelly as Fiona, Megan Kelly as Meg, and Maurice Clarke as Charlie. Once past a somnolent tempo for the choral prologue, Martin Yates conducts the National Symphony Orchestra and the singers with skill and sensitivity. — M.P. 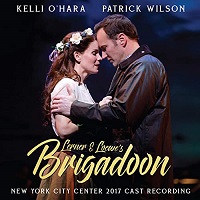 (4 / 5) Here’s a valuable aural document of one of the most moving and thrilling staged concert presentations of Brigadoon that one could ever hope to see. Kelli O’Hara and Patrick Wilson are sheer perfection in the leads; with her lush soprano, superb acting ability, and organic-sounding Scottish accent, O’Hara is a Fiona for the ages, while Wilson’s gorgeous, ringing baritenor and wonderfully natural way with spoken dialogue make him the ideal Tommy. Stephanie Block is spot-on luxury casting as Meg, and Ross Lekites sings Charlie’s songs with a melting beauty to rival the best of his recorded predecessors. Rob Berman conducts the large orchestra with a marvelously theatrical sense of forward motion, and the ensemble is exceptionally strong, whether its members are singing as a group or persuasively delivering solo lines in such songs as “Down on MacConnachy Square,” “Waitin’ for My Dearie,” and “The Chase.” Some listeners will miss the opening chorale “Once in the highlands….” and the charming if rather twee “Jeannie’s Packin’ Up,” both cut from the production and not heard here, plus there are some other minor excisions and revisions to the score that may bother purists. But, overall, this is a treasurable cast album of a production as miraculous as the town of Brigadoon itself.  — M.P.