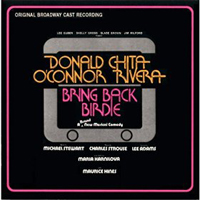 Original Broadway Cast, 1980 (Varèse Sarabande) No stars; not recommended. What were they thinking? Clearly unaware that Elvis had left the building, the creators of Bye Bye Birdie reunited in 1980 for this misbegotten sequel, which trashed everything that was charming about the original. The cast album proves that even Charles Strouse and Lee Adams are capable of writing a lousy score. In Michael Stewart’s barely coherent story line, Albert and Rose, happily married for 20 years, search for the vanished Birdie to have him appear on a Grammy Awards telecast. They wind up in Bent River Junction, Arizona, where an overweight Birdie is the mayor and Albert’s mother, Mae, is a bartender. Meanwhile, daughter Jenny takes up with the religious cult “The Sunnies,” and son Albert, Jr. joins a band called Filth (they perform on toilets). Presiding over the mishmash is Chita Rivera — who, amazingly, never condescends to the material. For her efforts, she gets the score’s two most pleasant items, “Twenty Happy Years” and “Well, I’m Not!” Donald O’Connor does what he can with several numbers that make Albert out to be a selfish dope. Other hard workers include Maurice Hines as a private eye and Maria Karnilova as Mae; she gets the 11-o’clock number, a pointless Charleston titled “I Love ‘Em All.” As Birdie, Elvis impersonator Marcel Forestieri is amusing in “You Can Never Go Back,” words that the show’s creators might have heeded. With this as an example of what can happen when you try to make lighting strike twice, how did Strouse ever get involved with Annie Warbucks as one of his subsequent projects? — David Barbour