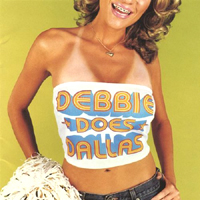 (2 / 5) The stage musical version of Debbie Does Dallas was conceived by Susan L. Schwartz and adapted by Erica Schmidt from the porno flick about a high-school girl’s attempts to fulfill her dream of becoming a Dallas Cowgirl. The show was most appealing for its dialogue, much of which was taken from the movie. The songs by Andrew Sherman, Tom Kitt, and Jonathan Callicutt are secondary in quality, not as funny as the dialogue, and uninteresting musically. The score is little more than an intentionally hokey collection of character numbers plus a couple of barely comic plot songs, with musical underscoring that pays homage to the soundtracks of the source film’s genre. Luckily, a good deal of dialogue is heard on the CD, and a fine cast — led by Sherie Rene Scott in the title role — makes listening to this recording an experience that’s almost enjoyable in a sort of sick way. Bonus tracks include karaoke mixes of a few of the songs and an “Orgasm Medley” in which select cast members give their all for the microphones. This is a cast album unlike any other. — Matthew Murray