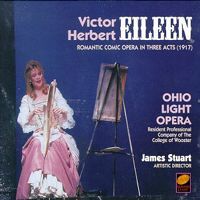 (3 / 5) Victor Herbert’s 1917 “romantic comic opera” is a beauty, every bar of it suffused with the master’s love of his native Ireland. Although Eileen ran but two months on Broadway, the score contains two songs that were big hits in their day, “Thine Alone” and “The Irish Have a Great Day Tonight,” plus a crowded program of heartfelt ballads, comic duets, and a half dozen outpourings of Irish nationalism, all gorgeously orchestrated by Herbert. So this first-ever complete recording of the show, taken from a live performance, should have been a cause for celebration when it appeared in 1997. It was, but distractions keep spoiling the party. First, the recording includes all the dialogue, and while Henry Blossom’s libretto isn’t bad for its florid type, it’s not the sort of thing you’ll want to listen to again and again. The acting and singing are brogue-heavy and variable in quality, with some real screeching on the high notes. The recording level is generally too low, yet the clomp-clomping of the chorus across the stage is loud and clear.  Lynn Thompson’s conducting is melodramatic; Herbert himself probably wouldn’t have inserted so many portentous rallentandi and crescendi. Still, this is a great operetta score, one likely to win friends for the under-appreciated genre. The Ohio Light Opera production even exhumed “Blarney Is Our Birthright,” which probably hadn’t been heard since 1917. The company’s dedication is spectacular even when its execution doesn’t quite measure up.  — Marc Miller 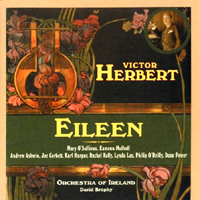 (4 / 5) Producer Larry Moore traveled to Ireland to record this complete rendering of the 1917 Herbert operetta. The Hibernian spirit comes through loud and clear; if you’re not Irish, you will be by the final chorus of “The Irish Have a Great Day Tonight.” Again, Herbert’s orchestrations are luscious (so much harp!), and this cast is excellent, with particularly fine work from Lynda Lee as Lady Maude and Dean Power as Dinny Doyle. Moore’s notes on the recording are informative, there are bonus tracks cataloging some beautiful cut material, and it’s all  capped by a rousing orchestral suite. Plus, you don’t have to sit through all that uninteresting text, as with the Ohio Light Opera version. This would be a five-star recording but for one thing: David Brophy’s conducting tends toward the lethargic. “Too-re-loo-re” sounds like it’s heaving a one-ton weight behind it, and “Life’s a Game at Best” drags fearfully. Still, the performance overall is sumptuous and well worth hearing. — M.M.