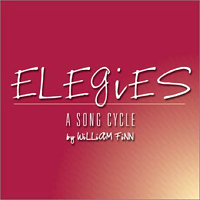 (5 / 5) In his songs for the theater, William Finn is often pointedly autobiographical; he seems happiest when dissecting his own thoughts with a sharp scalpel. Shying away from nothing, particularly not from death and grief, his Elegies: A Song Cycle is breathtaking in the depth of its commentary on the rewards and woes of being part of a family, a group of friends, and a society in good times and bad. “I wrote this song to not forget Mark’s all-male Thanksgiving,” he reports at the end of one number, and that statement is indicative of his tell-all compulsion as expressed in often free-form melodies and sometimes carefree rhyming. Though there are references here to people and places from Finn’s upbringing, he’s really chronicling the period of time bracketed by the advent of AIDS and the Twin Towers’ collapse (“Goodbye” includes remarks by someone phoning from the doomed buildings). There’s no denying that much of the song cycle’s brilliant content is painful, yet Finn invokes laughter amid tears. “Infinite Joy” may be the best song he has ever written — a marvel as delivered by Betty Buckley, for whom this sort of soaring anthem is ideally suited. The other classy warblers on this cast album, for which Vadim Feichtner did the musical arrangements and Gihieh Lee the vocal arrangements, are the lustrous-voiced Carolee Carmello, the commanding yet easy-going Michael Rupert, the earnest Keith Byron Kirk, and the delightful Christian Borle. It all adds up to infinite joy.  — David Finkle